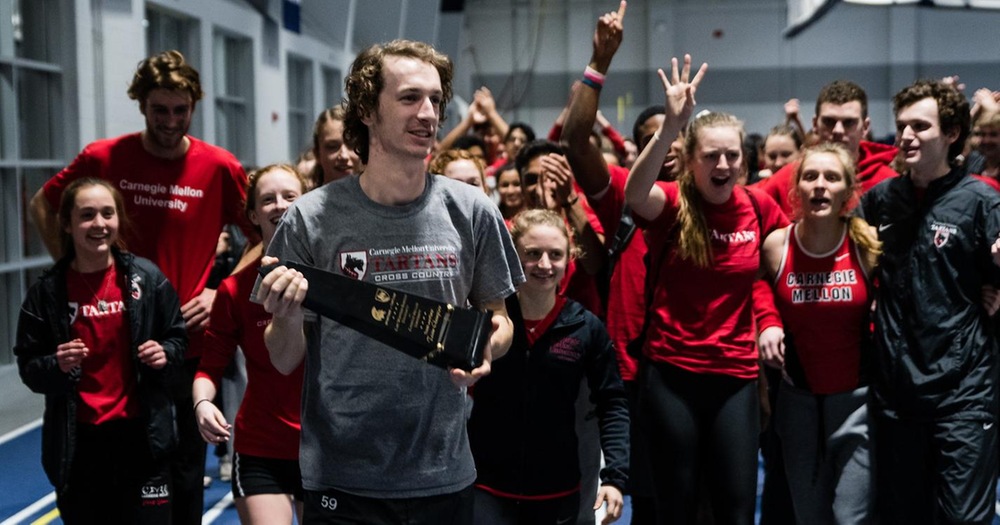 The Tartans’ victory over the Case Western Reserve University in the 12th annual Battle for the Obelisk marks their fourth consecutive win of the competition. (credit: Photo courtesy of Carnegie Mellon Athletics, Naji Saker)

It was apparent the women’s team would be a force to be reckoned with from very early on. On the track side of the competition, Senior Leah Kendrick’s time of 9.42 saw her win the 60-meter hurdles, with senior Joanna Baranowski and first-year Liz Barre just behind, at 9.44 and 9.53, respectively. Sophomore Taylor Jacobs then won the 800-meter run, coming in at 2:25.25, and first-year Samantha Giordani won the 60-meter dash with a time of 8.04. Giordani was also top of the podium for the 200-meter dash, clocking a time of 25.92, not only setting a meet record but also improving her school record.

The Carnegie Mellon University women found success in long-distance events as well, sweeping the podium of the mile run with seniors Kate Reilly and Wade Lacey placing first and second with times of 5:16.89 and 5:34.04 respectively, and junior Isabelle Chickanosky placing third with a time of 5:36.79. With 5:16.89, Reilly also surpassed the meet record, set by herself a year ago, by nearly three seconds. In both the 3000-meter run and the 5000-meter run, senior Abigail Levine came out on top, with times of 10:52.73 and 18:35.44 for the respective races. Kristen Seballos placed second in the 3000-meter run with a formidable 10:54.88, and first-year Joyce Zhang placed second in the 5000-meter run at 18:38.80.

The Tartan women’s team also triumphed in both relays, with the 4x400-meter relay consisting of Baranowski, first-year Jasmine Fahrenkrug, junior Valerie Reiling, and Giordani clocking in at 4:12.58, and distance medley relay consisting of senior Valerie Collins and first-year Mona Yuan, along with Reilly and Lacey finishing with a time of 13:24.37.

With the field events, the Carnegie Mellon University women’s team performed just as well. With heights of 3.72, 3.12, and 3.12 meters, seniors Michelle Karabin, Baranowski, and sophomore Ashley Zhang swept the pole vault podium. In the long jump, first-year Francine Leung came out on top with a leap of 5.05 meters.

In terms of the Tartan men, the competition was closer, but having scored a total of 77 points against Case Western Reserve University’s 58 points, the victory was just as solid.
The Carnegie Mellon men performed well in the field, sweeping the shot put, with first-year Bailey O’Malley putting in a winning throw of 14.71 meters, and his teammates, junior Bram Miller and first-year Len Huang coming in second and third with throws of 13.92 and 13.26 meters, respectively. Additionally, junior Logan Stahl was victorious in the weight throw with a toss of 14.92 meters. In the triple jump, senior Fred Dauphin placed first with a jump of 13.73 meters, while junior Matt Sloan came in second with a jump of 13.11 meters.

The Tartan men also found success on the track. Junior Marvin Bennett Jr. won both the 60-meter dash and the 200-meter dash, with times of 7.06 and 23.02, respectively, and sophomore Graham Eversden claimed the top-of-the-podium position in the 800-meter run, clocking in at 1:57.77.

In terms of the distance events, seniors Evan Yukevich and Liam Walsh placed first and second in the mile run, coming in at 4:22.64 and 4:23.50, respectively, and senior Hunter Hartshorne won the 3000-meter run for the second year in a row with a time of 8:41.27, breaking the meet record he set last year. The 5000-meter run, on the other hand, saw senior Edward Goebel at the top of the podium with a time of 15:14.21, with sophomore Michael Obroin placing second with a time of 15:24.42.

Altogether, the Tartans accumulated a total of 163 points against the Spartans’ 108 points for an unassailable victory. This triumph marks the fourth straight win of the competition by the Tartans, many of whom achieved new personal bests and season’s bests. Now, the Tartans look forward to competing against Denison University in Granville, Ohio on Saturday, Feb. 1.