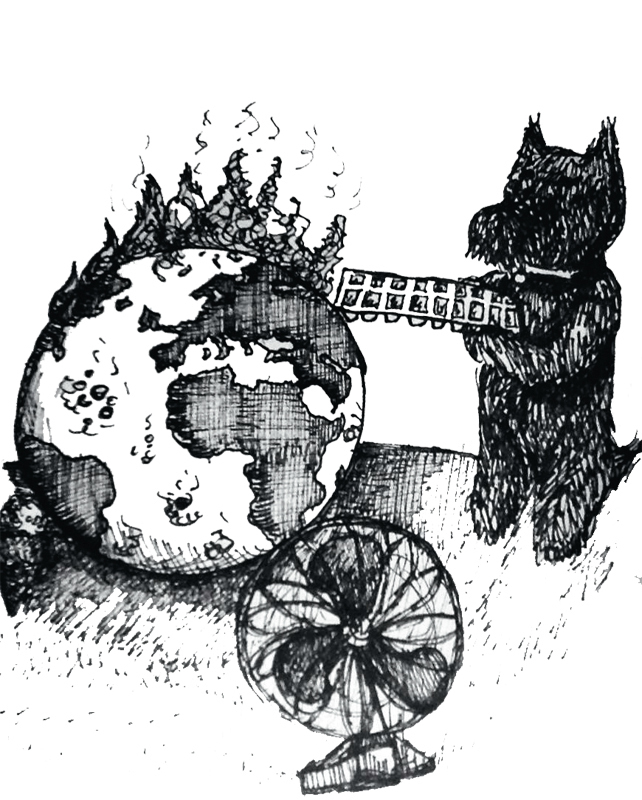 In last week’s issue, our SciTech editor, Ashwin Srinivasan, wrote about a Cambridge study showing the degree to which the arctic ice shelves were breaking up due to global warming. It was a good article and received positive responses from all we knew who read it.

The Tartan has dabbled in coverage of climate change, especially in our SciTech and Forum sections, but it lacks the consistency with which we write about other high-profile topics like gun control or the baffling resurgence of diseases from anti-vaccination trends. As an Editorial Board, we agree that climate change, and a lack of action to combat it, is an existential crisis that deserves consistent coverage on our pages.

We decided it would be worth it to try exploring, in a public space, some of the reasons why this topic in particular is easy to forget to talk about, some of the ways we can possibly rectify it, and why it is particularly important to continue to boost student conversation about it here at Carnegie Mellon.

This problem is not limited to just The Tartan, or media coverage in general. But the way that we think about the stories we write can be used to think about what we do.

A Columbia Journalism Review article found that climate stories in 2018 were often dominated by “hard news” coverage, or coverage that centered around a specific event or report. Understanding the workings of climate change on a macro level is a scientific endeavor. It would be irresponsible for non-expert journalists to just speculate about the effects of climate change, so it follows naturally that the coverage of climate change usually follows big, blockbuster studies or huge meta analyses of existing literature.

Often, those reports provide material that shape how scared we ought to be of some impending crisis. Notably last year, the Intergovernmental Panel on Climate Change released a report which found the predicted date for 1.5°C of warming to be somewhere between 2030 and 2052, which is the figure that has been agreed upon as a crisis level of warming, spurring global consequences. Furthermore, the National Climate Assessment released by the White House chronicled how climate change might affect natural disasters across the U.S.

These kinds of hard science reports are few and far between, as exemplified by the fact that the last year brought somewhere around two. And hard news coverage is difficult to do here at The Tartan since we keep our news section strictly Carnegie Mellon-related. Writers and editors also sometimes struggle to link events on campus or in Pittsburgh to individual international reports.

As mostly young people, we will likely be alive in the critical climate period which may seem abstract to some, “2030 to 2052.” Even though this is an overly repeated point in climate change activism, to the point that it may feel a little guilt-inducing to older folks, it is actually true that people will feel the effects of a continuous disaster in different ways.

Though it might take a couple decades for people in this specific region to feel the effects of global climate change, there are places where the effect on natural disasters and natural resources has already created terrible effects in the lives of millions. An average of 24 million people are displaced every year by climate disasters.

It’s easy to find examples of conservation on campus. For instance, the Tepper Quad and Gates have composting in their food locations, and that the Green Practices Committee is thinking about the ways in which we can reduce waste on campus. But the bulk of pollution in the world is not happening on the Carnegie Mellon campus, or indeed from direct consumer waste at all.

The ways we can best influence the direction the world is heading in regards to climate change is what we do after graduating. There are obviously those who spend their time here majoring in something like Environmental Policy or Engineering and Public Policy and go on to deal more directly with environmental issues in the policy sphere or in research. There are courses offered every semester that deal with the environment and energy policy. But even those who choose an entirely different path will enter careers that will directly affect pollution and energy consumption on a global scale.

According to a survey by the Career and Professional Development Center, the top hiring companies of the Carnegie Mellon class of 2018 were tech companies like Amazon, Apple and Google, consulting firms like Deloitte or Pricewaterhouse Coopers, or financial institutions like Goldman Sachs or Capital One. Furthermore, much of the funding for research at Carnegie Mellon goes to military groups or military contractors.

These students will go on to make decisions about how products are shipped around the world, how hazardous materials are dealt with, how to invest in fossil fuels or how weapons cause lasting environmental devastation overseas. To this end, students should not recognize understanding climate change as something that is separate from their area of study, but instead as something that they are choosing not to weave into their understanding of the world.

As students that, according to the 2025 strategic plan, ought to “recognize, frame and address complex problems; the capacity to combine reflection with appropriate action; the ability to communicate effectively,” we should not shy away from tackling an issue like climate change just because its global effects are hard to consider in the context of your personal actions and influence.

At The Tartan, we want to embrace this challenge by writing pieces that attempt to look at what we can influence and change in our own community. Sometimes we will struggle to talk about its effects in the context of our sometimes sheltered campus. Instead, we must try to talk about some causes that may be rooted here. We applaud students and campus community members who are addressing these issues in their own work, and we encourage others to consider their work in that context.