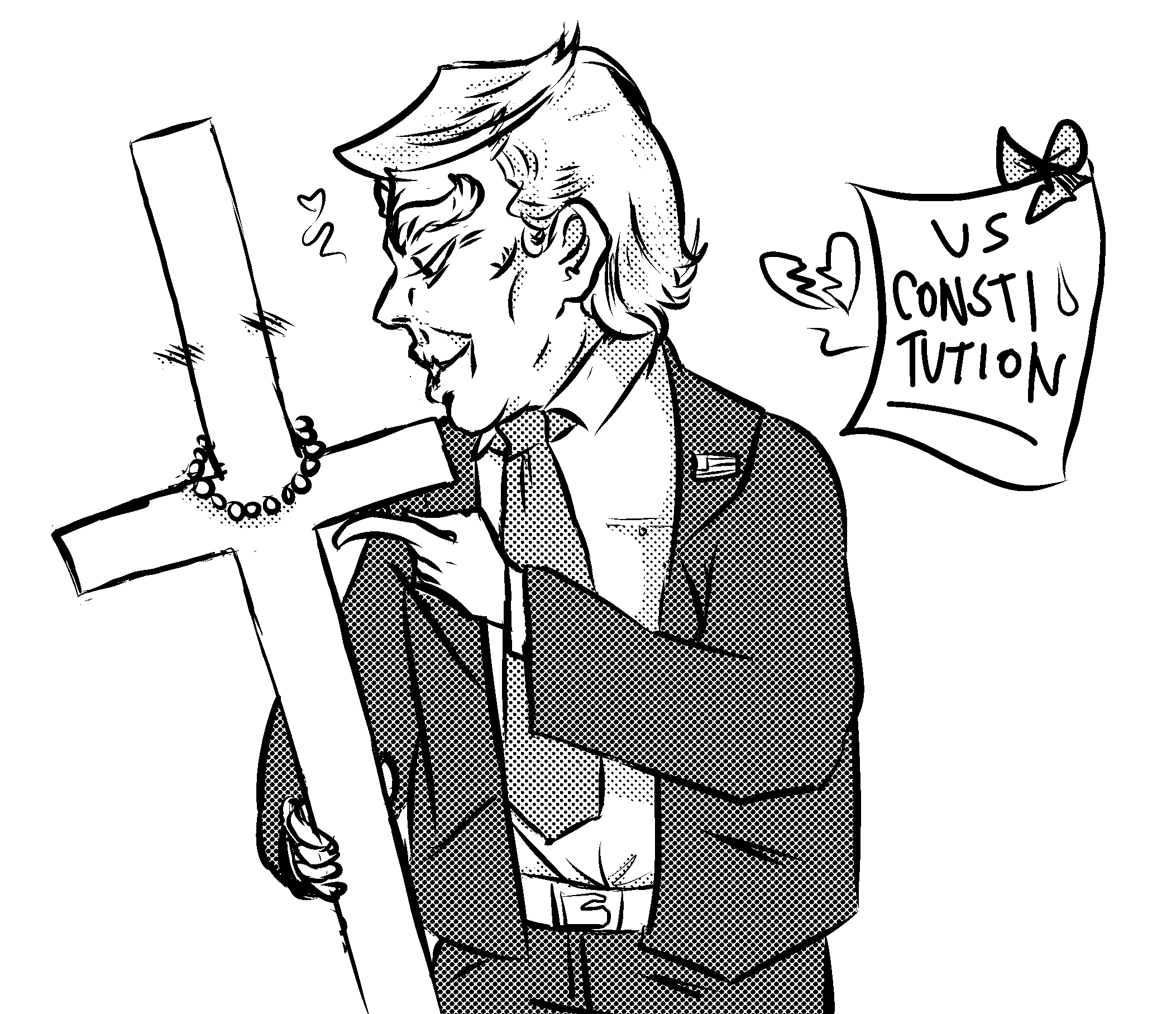 Credit: Tami Tedesco/
Editorials featured in the Forum section are solely the opinions of their individual authors.

Right when the vast majority of American citizens checked their newsfeed and hypothetically asked themselves “what did Donald Trump do this time?”, Trump, over the National Prayer Breakfast, announced his wish to “totally destroy” the Johnson Amendment.

Add that to a list of jarring conversations held over a meal.

After a seemingly endless string of controversies and angry tweets, this may not have been a surprise, but the preexisting political chaos does not negate the potentially disastrous aftermath that the repeal of the Johnson Amendment can have on the United States, its citizens, and the core principles of which this country was founded on.

The Johnson Amendment, enacted in 1954, is a tax code that “prohibits all 501(c)(3) non-profit organizations from endorsing or opposing political candidates.” Although this amendment is multifaceted and religious organizations are only one type of organization that are affected, there is a clear conflict of interest that emerges from this decision to overturn it — prominently, with the First Amendment.

The First Amendment is famous for protecting freedom of speech, but it also entails separation of church and state. When our founding fathers established this nation in 1776, they were escaping a nation where government was conflated with religion and hoped that this new nation would not repeat the same mistake. Over the years, America became a melting pot where people were gaining the right to practice their faith. Although the degree of religious tolerance in the United States is debatable, most can agree that, in theory, America’s core values cherish the “life, liberty, and pursuit of happiness” for all Americans.

There are a multitude of incentives for Trump to meddle with the Johnson Amendment. Even before he was sworn into office in January, while on the campaign trail, he tried to pander to the evangelical votes. An overwhelming majority of white evangelicals voted for Trump in November 2016. Trump appealed to the evangelical voters for various reasons such as his promise to overturn Roe v. Wade, a court case which gave women the right to abortions, and his choice in running mate, former Indiana governor Mike Pence.

Overturning the Johnson Amendment would mean evangelists — especially televangelists — can contribute and invest more into politics than ever before, and Trump is cognizant of the power of the repeal. Jerry Falwell Jr., an early Trump endorser, states that “[Trump] thinks it is going to be a revolution in the Christian world.” Although Trump did not gain nearly as much support from non-white evangelists, the larger, wealthier, and more influential demographic that he has attracted far outweighs the lack of support he has received from other demographics.

Although these backers can afford the repeal of the Johnson Amendments, these are not the only people affected by the repeal. The Johnson Amendment also allows places of worship of all faith — not just Christianity — to be exempt from paying taxes. Many churches across the country rely on the donations of attendees in order to scrape by and make a living. That is merely scratching the surface — for minority religions, the numbers are usually more depressing. In order for Trump to get his hands on money from friends such as Mark Burns, pastor and evangelist who claims to “see the message of grace” in Trump, and Joel Osteen, pastor and televangelist who praised Trump as “a friend of our ministry”, Trump must first push more economic burdens down the throats of the countless listeners and their respective places of worship.

It is worth mentioning that this is not the first threat on the First Amendment that Trump has imposed. On the campaign trail, he stated he would “open up our libel laws” so that news organizations could be sued and he could “win lots of money.” His Twitter has been rampant with him calling out various media sources such as Cable News Network and the New York Times as “fake news”. He even tried to define freedom of the press in a Tweet, reading “It is not ‘freedom of the press’ when newspapers and others are allowed to say and write whatever they want even if it is completely false!”

The Alliance Defending Freedom, a conservative group that is in favor of religion being more prominent in the public space, "[argues] that [the Johnson Amendment] restricts free speech by censoring the content of a pastor's sermon,” thus possibly creating an argument that Trump is not, in fact, jeopardizing the First Amendment. However, what Trump and a significant portion of his supporters fail to realize is that the First Amendment is not just applicable when it is convenient to fulfill their own agenda and disposable in any other context.

Tomi Lahren, a public Trump supporter, claimed that Trump would “shake-up Washington.” Although many of her stances have been controversial, people from both sides of the political divide can probably agree that the White House has not been quite the same since the day Donald Trump transformed from businessman and television personality into 45th President of the United States.

In many respects, Trump has shaken up Washington. He “drained the swamp” and is in the process of re-swamping to unprecedented levels by filling his Cabinet with controversial choices such as Ben Carson for the United States Secretary of Housing and Urban Development and, more recently, Betsy DeVos for the United States Secretary of Education. His stance on the First Amendment has simply been the cherry on top of his colossal sundae that he has managed to make in mere weeks of being in office.

“Separation of church and state” has been something clamored about and cherished since America first became a sovereign nation. At the trajectory we are heading, we might find our nation back to where it was in 1776. Unfortunately, this time we do not have a “new world” to retreat to if we find our churches buying political power with cold, hard cash.