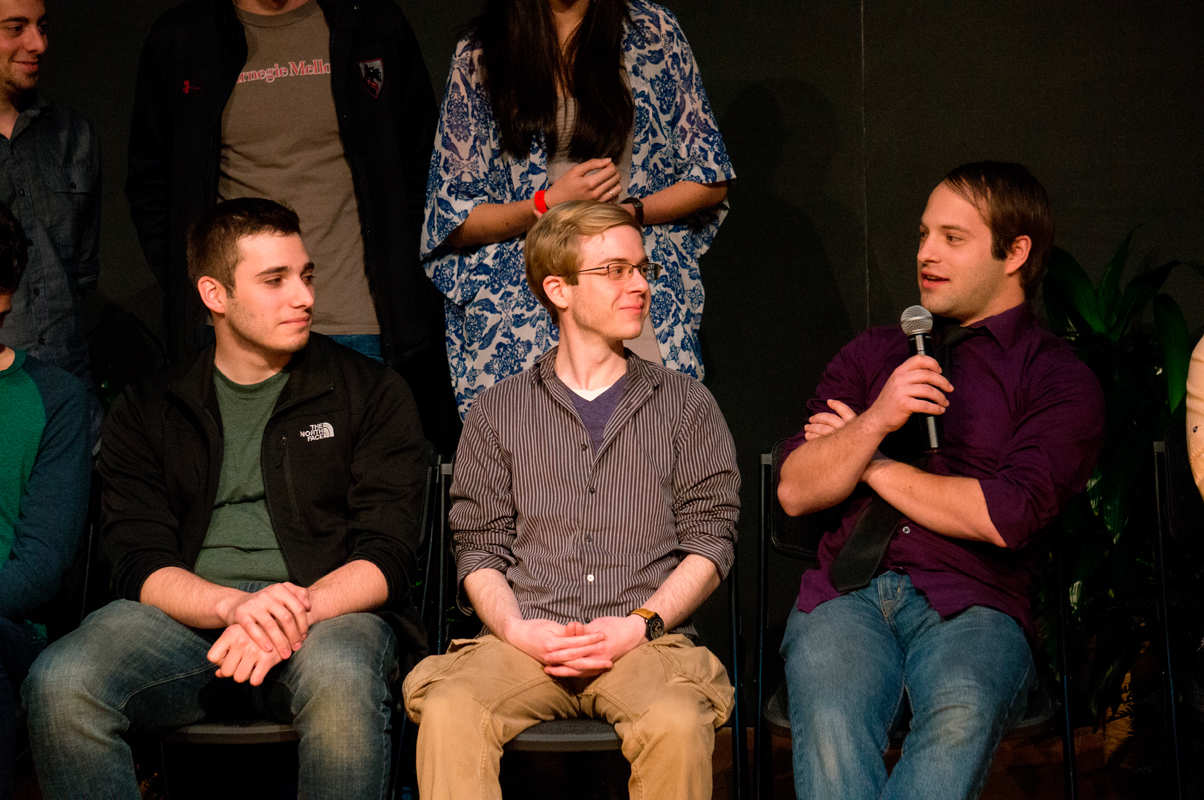 After the screening of the films, the filmmakers took part in a panel discussion with each other and the audience. (credit: Abhinav Gautam/Photo Editor)

In only its third year, the Shot for Shot student film festival is still young enough that each year the program gets notably better. This year, the event nearly filled the Cohon University Center’s McConomy Auditorium to capacity with students, faculty, family, and community, and delivered quality short films. Some relied on overplayed subject matter, but many were fresh and entertaining.

These films aren’t your sixth-grade movie projects shot with a Best Buy-bought video camera. They’re professional creations, made with professional equipment by near-professionals themselves. It’s clear these student filmmakers take themselves, and their work, very seriously.

All Sight
Directed by Talia Levin
The festival opener asks, “What happens when our desire to live in the past overwhelms our motivation to live in the present?” A grieving widower spends his time in a virtual video game reality in which his wife is still alive, meanwhile neglecting his young daughter. Though it ends sweetly, it’s a heartbreaking story that, despite the science fiction, isn’t too far from reality.

The Colourful Mind
Directed by Bethany Barich
Young painter Gracie Winters lives in a literally black-and-white world, chased by an oppressive government determined to quash individual expression. It’s beautifully shot, the black-and-white lens creating a story in light and shadows. But the trope of expression-versus-government, complete with a central artist martyr, has been done before, and this film’s arc is hard to distinguish from all the rest.

Table For Two
Directed by Connor Yoho
Three masked men break into a Pittsburgh home. Meanwhile, a couple bickers in a nearby park, their relationship on the verge of breakup. The stories seem entirely disparate until they’re not. What looks like a crime in progress isn’t what we expect. While other films trudge through serious material, this one had the audience laughing throughout, in anticipation of the hilarious ending twist.

Diamonds in the Rough
Directed by Dominique Carino
A little-known secret of downtown Pittsburgh, the Helfer family sets diamonds and toils over custom rings at their private jewelry shop. But life isn’t all gemstones and sparkles — far from it, especially for heir apparent David Helfer, who struggles to follow his father Ira’s footsteps. Diamonds seems to stray too far down the family dynamics track, leaving us there at the end, without rounding out the narrative. Still, it’s a poignant interview-based story, coarse and grounded like the city it’s set in.

Muted
Directed by Lex Truss
A frustrated young woman crumples up her written work, tossing the pages in a dingy dumpster in a rainy alley. Meanwhile, a ragged, bearded man digs up the pages, piecing them back together. When they meet, we see a touching exchange between two disparate characters. The effect is sweet, but the situation seems a bit contrived.

Milkman
Directed by Garrett Kennell
Milkman is a standout for its sheer whimsicality, both in photography and plot development. The titular character is also a jolly caricature of himself, in a pristinely suburban neighborhood that is a caricature of itself. When a tragic accident occurs, the milkman springs into action, triggering a hysterical series of events. Spotted with fanciful humor, this film is probably the most perfectly executed.

Pick Your Poison
Directed by Ashley Czernienski-Hagan
Constant miscommunication plagues star-crossed students Parker and Julie. The story is convoluted, with the poison metaphor somewhat lost on the audience — but on a scene-by-scene level, the writing is strong. Spiced with lines like, “ ‘How do you feel about sushi?’ ‘Not as strongly as I feel about Indian,’ ” the script adds clever punches of color.

Rust Belt
Directed by Daniel Kusbit
Devoid of characters, dialogue, or plot, this three-minute film is primarily an aesthetic experience, pairing shots of rusting Pittsburgh bridges with free-flowing instrumental music. It experiments with geometry and movement, layering frames atop each other in dogged search of beauty, transforming these mundane, decaying structures into things of loveliness.

Marcus Sunshine
Directed by Marlee M. Schneider
A reformed drug dealer turned stripper gets a compassionate portrait in this award-winning film. The treatment is gritty — it’s probably the least polished of all the films — but respectful, humanizing our hero Marcus Sunshine in tender scenes with his twin sister. The filmmakers include a moment of graphic nudity, but it’s an important decision to trade comfort for relevance, and thanks to beautiful filmmaking, the scene lends an odd majesty to Marcus’s work. Perhaps the best film overall.

Steel Town
Directed by Nicolas Hurt
In 1892 Homestead, a power struggle arises between underpaid steel mill workers and the robber-baron mill owners. Based on real events, this film condenses a historical epic into 20 minutes. Though impressive on many levels — detailed, period-appropriate costumes and a large cast — Steel Town takes itself a bit too seriously. It’s difficult to present a classic trope — hardworking, struggling laborers against wealthy Gilded Age tyrants — as new, and In only its third year, the Shot for Shot student film festival is still young enough that each year the program gets notably better Steel Town almost gets there.