Court transcripts come to life in 8 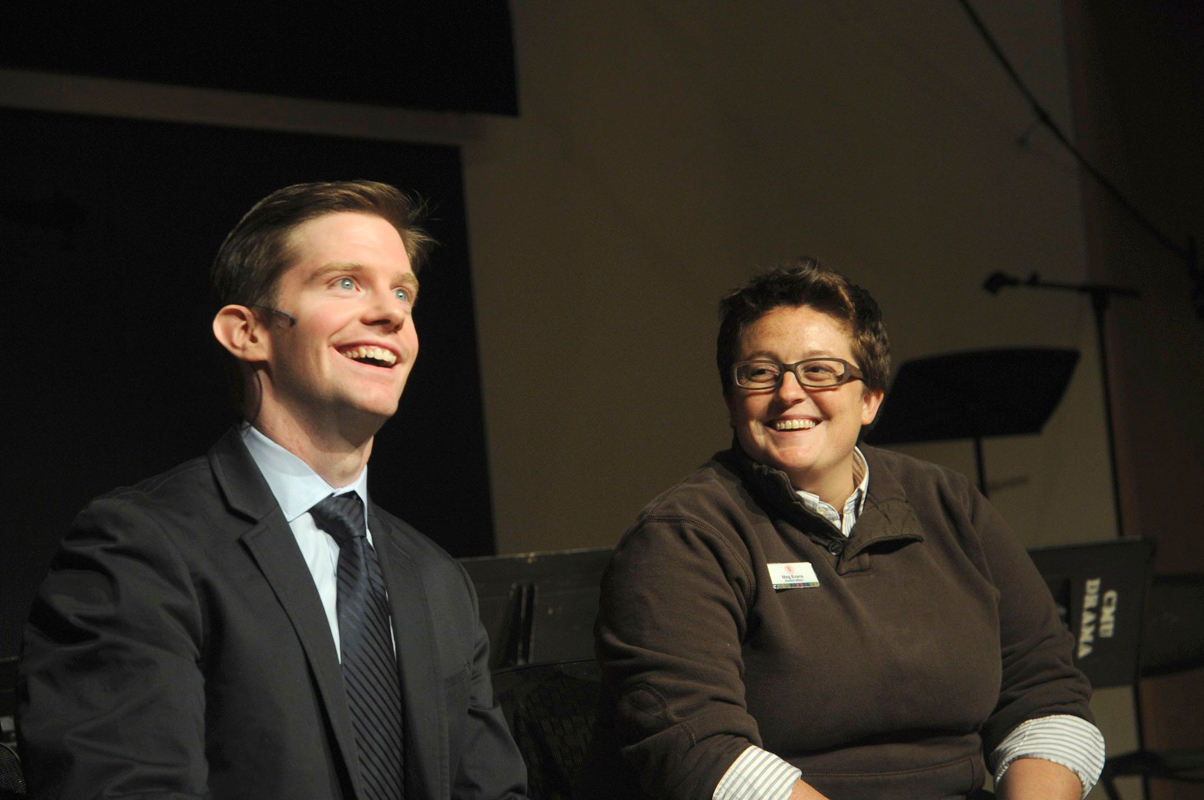 School of Drama alum Rory O’Malley talks about participating in a reading of 8 with Brad Pitt in Los Angeles during the Q & A after last Monday’s reading. Meg Evans, LGBTQ Resources Coordinator, was also present during the Q & A. (credit: Jennifer Coloma/Operations Manager)

Case in point: In 8, defense attorney Charles Cooper stutteringly argues to Chief Judge Vaughn R. Walker that he doesn’t need evidence to prove his case. It’s absurd to the point of disbelief, but the most shocking part is that it actually happened — in the most talked-about court case of 2010, no less.

Audience members got to experience this absurdity first-hand last Monday in McConomy Auditorium when the School of Drama and Alumni Relations presented a staged reading of the play, featuring Tony Award-nominated alum Rory O’Malley (CFA ’03).

8 tells the story of the court case against Proposition 8, which amended the California state constitution to outlaw same-sex marriages. 8 is unique in that the entire play is compiled solely from interviews with the plaintiffs, quotes from media interviews, and court transcripts of the trial.

O’Malley, who co-founded the marriage equality advocacy group Broadway Impact, first had the idea for the play when a federal appeals court ordered that the video footage of the trial be sealed. He and the other co-founders of Broadway Impact, Gavin Creel and Jenny Kanelos, decided that it was important for the story of Perry v. Schwarzenegger, the court case in question, to be made public.

So, Academy Award-winning screenplay writer Dustin Lance Black combed through court transcripts and conducted interviews with the plaintiffs, then pieced together verbatim quotes to create 8. The first reading in New York City took place last year and featured an all-star cast, including Morgan Freeman, John Lithgow, and another Carnegie Mellon alum, Matt Bomer (CFA ’01). Since then, over 275 readings have been held in 47 states.

If you didn’t know that the play was taken straight from court transcripts, you would find its plot difficult to believe — the defense looks so inept that, were it fiction, you would roll your eyes at how one-sided the case seemed. But as O’Malley emphasized in a Q & A session after the reading, “Many times people thought that [Black] was writing it to make the other side look bad, [but] they really did look this bad.... I heard him say that he didn’t think he needed any evidence in a federal courtroom, and it was shocking, but it’s not that he didn’t need any, it’s just that he didn’t have any.”

While some of the material may be hard to believe, the reading, performed by O’Malley and a mix of Carnegie Mellon students and professors, made it more convincing by bringing the script to life. Since the actors were reading the script while performing, some occasionally stumbled over their lines, but the fumbling proved to be only a minor distraction.

Assistant professor of acting Cameron Knight wielded sharp wit as David Boies, one of the attorneys for the plaintiffs; by showing Boies’ fierce intelligence, Knight made it easy to understand why any potential witness for the defense would fear Boies’ cross-examination. Similarly, O’Malley showcased plaintiff attorney Ted Olson’s incredible oratory skills, delivering his closing remarks so movingly that it makes one wonder how anyone could find court proceedings dry or dull.

On the other side of the aisle, associate professor of drama Ingrid Sonnichsen presented a deliciously despicable portrayal of Maggie Gallagher, the former president and co-founder of the National Organization for Marriage and an outspoken opponent of marriage equality.

Interwoven throughout their conversation are cuts over to Gallagher, who is expounding upon the the damage that homosexual parents cause their children. Through the juxtaposition, the ordinary family conversation, heightened by the actors’ spot-on portrayal of family dynamics, becomes a profoundly touching counter-argument to Gallagher’s rant.

8 provides a captivatingly clear look at the Proposition 8 case and proves that the facts point decidedly in favor of gay marriage. O’Malley hoped that audience members who were undecided about the issue before seeing 8 would take the evidence presented in the play to heart.

Although he admitted that most of the theater and theater-going community tends to already support marriage equality, he said that the play can equip viewers with arguments and evidence that they can use to convince others. “We don’t want to be preaching to the choir,” he said. “But we are teaching the choir to sing.”

If 8 is its inspiration, that choir is sure to come away singing a beautifully convincing melody.