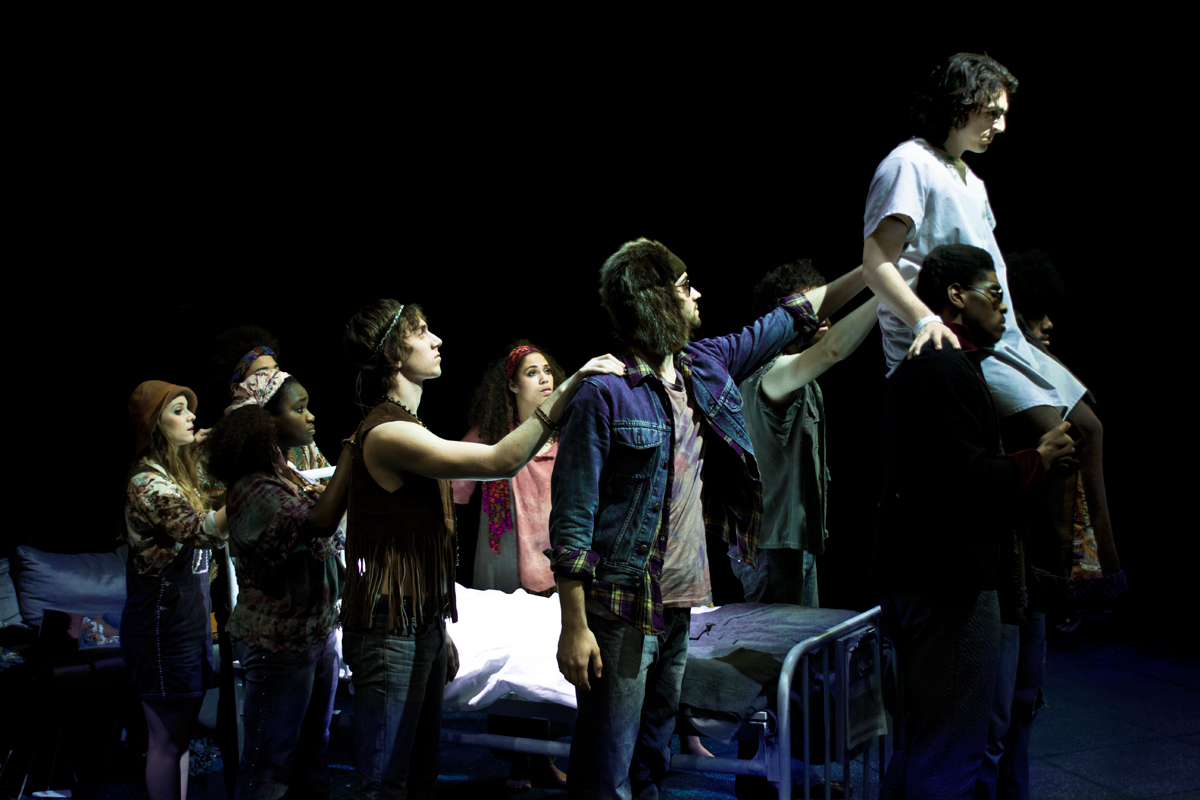 Members of a hippie tribe help Claude (junior Jacob Tischler) choose between going to war or giving up on his dream to make change. (credit: Courtesy of Christian Fleming)

That’s how Christian Fleming, a senior directing major, described his rendition of Hair, which was performed last week in the Helen Wayne Rauh Theater in Purnell. Fleming was behind the scenes of the show that served as his senior thesis. “Instead of documenting the journey of a generation of youths,” Fleming explained, “we are trying to create a compelling, personal story of one man’s life.” This plot adjustment was intentional, and Fleming said it contributed to his desired vision for the production.

As audience members filtered into the theater, they were greeted by Claude (played by junior acting major Jacob Tischler), the show’s main character, sitting silently in a hospital bed in the middle of the stage. Claude thinks back to the moment he received his draft card for the Vietnam War. He is greeted by some familiar faces: From behind a 30-foot white sheet come the 11 members of the “tribe,” spinning Claude’s hospital bed as they parade around him. Their leather vests, bell-bottoms, and voluminous hair provide colorful and vibrant contrast to the drab, hospital gown-wearing man weakened by post-traumatic stress disorder.

The tribe whisks him back to the time when he was young and rebellious, when he adopted the title Aquarius. With this confidence and bravado, Claude drops out of school, not holding back in expressing his true feelings to his principal, who is scandalously imagined as a Nazi. The free-spirited hippies show Claude a new life, unbounded and full of beauty.

However, Claude’s parents pressure him to “start being an American” and get a job. The beauty of the stage is exemplified in a great scene when Claude explains everything he has to his parents. During this song, called “I’ve Got Life,” the members of the tribe were seamlessly integrated into the scene as background dancers. Tischler’s voice dominated the song, from the slower emotional parts to the energetic wordy bits.

Claude deals with a difficult dilemma in the show: He wants to make change, but doesn’t want to go to war to do it. When he receives his draft card, however, he begins to think seriously about his departure. Claude then sings “Hair,” the title song, a number dedicated to the luscious and lengthy locks that defined the late ’60s. This song is the epitome of the show’s message the importance of self-expression. It begins slowly, with ­Claude and fellow friend Berger (played by Rodney Jackson, a junior drama major) harmonizing gradually before exploding into a lively parade of expression and resistance.

In a pivotal scene, the members of the tribe surround a fire with the men lining up one by one, each tossing his draft card into the flames. Claude is last in line, and as his friends cheer him on, he approaches the fire. But when he goes to toss it in, he can’t. This moment of indecision is emphasized by the piano’s high notes, played by junior piano performance major Stephanie Mao.

And suddenly, reality hits. The playfulness of the first half of the show is gone, and the impending dangers of war quickly approach. Those in charge of the show’s props did an excellent job, especially in this portion of the performance, substituting canes for muskets and bent wire hangers for bows and arrows.

All too soon, the grim and gritty reality sets in as fellow soldiers are shot while crossing trenches — wonderfully accompanied by a sharp, low crash on the piano. Some take their own lives with imaginative yet disturbing depictions of self-strangulation and lighting themselves on fire. The dramatics continue as Claude ends up in a one-on-one fight with an enemy soldier.

Claude steals his opponent’s knife and fatally stabs him, but is so horrified by what he’s done he convulses in horror and begins to cry. In the end, Claude falls victim to the violence of war and suffers several knife gashes — accentuated with a loud piano crash, reminiscent of the slashing from the infamous shower scene in Alfred Hitchcock’s Psycho.

The tribe members return him to the hospital bed where the show began, giving their goodbyes. The light goes out on the tribe, shining only on Claude as he curls up in bed. Total darkness fills the stage as the tribe sings the last lines of “Let the Sun Shine In.”

This show is as big as the hair it’s named after, but the theater only had a 140-person maximum capacity, so scaling down the big production was no easy task. The cast of 12 tackled an impressive 24 songs, each member getting his or her own solos throughout the show. A single, static set with just the right amount of detail served as the backdrop to the show. Despite being a scaled-down version of the original, this production of Hair hit all the right notes.