First-years create, innovate at The Frame 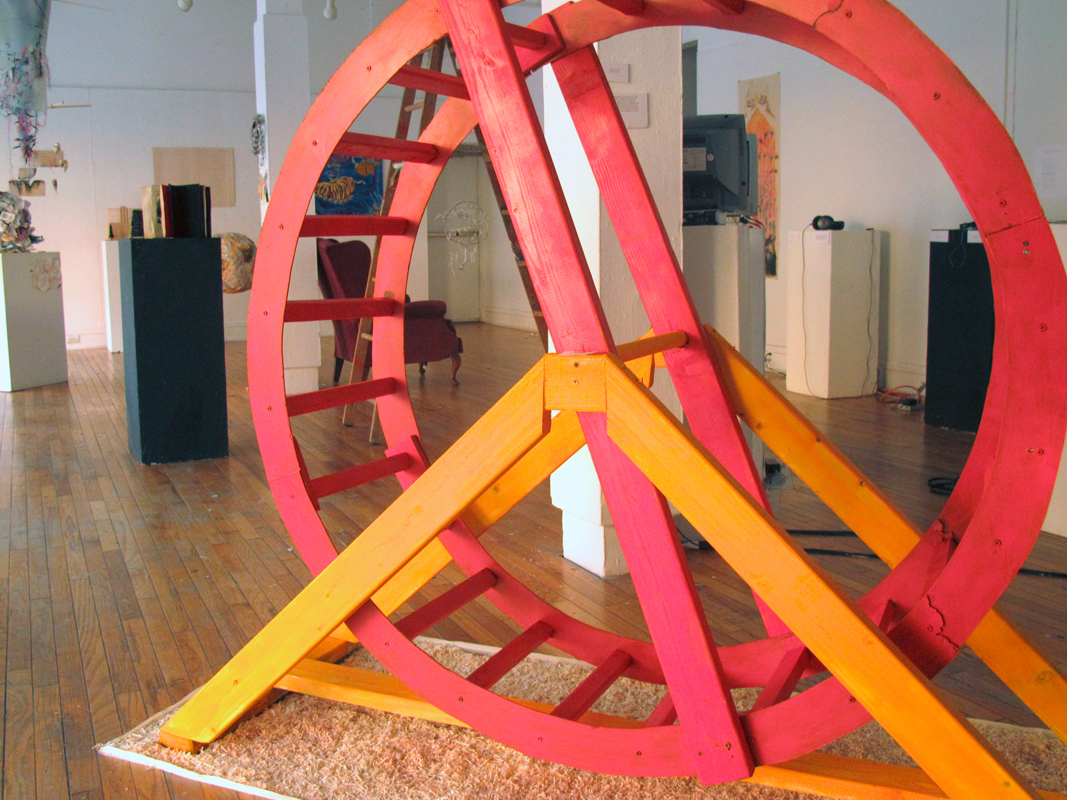 A giant, brightly colored hamster wheel is among the innovations of first-year students in the School of Art currently on display at The Frame Gallery. (credit: Braden Kelner/)

Have you ever wondered just how much information someone knows about you? Have you thought about what the inner workings of your brain would look like mapped out?

First-year students from Concept Studio I courses in the School of Art — taught by art professor Lowry Burgess and associate professor of art Andrew Johnson — joined together to respond to these questions through visual art. Displaying their work at The Frame Gallery, the artists utilized a variety of media — including photography, film, audio, and paint — to create a diverse set of final products. The exhibit opened this Friday, and features pieces ranging from a hamster wheel to a pamphlet that asks disconcerting personal questions.

Students taking the course with Burgess illustrate how their minds operate in an exhibit titled Mind Map. In her piece “Mind Maze,” first-year fine art major Nivetha Kannan describes her brain as a complicated labyrinth that is influenced by those who surround her.

She encourages viewers at the gallery to metaphorically play with her mind by dropping marbles into a slanted maze with various final destinations at the bottom, similar to a Plinko Board. Like other pieces at the exhibit, Kannan’s work is interactive and, in turn, stimulates internal reflections.

Meanwhile, Johnson’s students produced works for the exhibit titled Big Brother, Where Art Thou?, which explores surveillance and human observation. In her piece “Relational Barriers,” first-year fine art major Carolina Vogt explained that intimate relations are barred by three things: words, the knowledge of someone’s past, and prevailing dispositions or tendencies.

“I was focusing on exposing things that should be hidden, and then I got into this idea of human relations and what stops you from having a very intimate relation with someone,” Vogt said.

To depict the barrier of language, Vogt transcribed a letter written by her mother multiple times and realized that she did not understand the meaning of the words, no matter how many times she transcribed it. Her transcribed letters are on display next to a transparent surface with three dates embroidered upon it. The dates represent three important points in Vogt’s life.

Vogt also created a door covered in pictures that portray her own disposition — the way she looks and acts when she is alone. All three facets of her piece are displayed with transparent materials to show how easily someone can learn about a person through elements of surveillance.

When experienced as a whole, the gallery effectively exudes the uneasiness people feel when they are being watched, as well as the quirkiness of the inner workings of the brain.

However, with no clear division between Mind Map and Big Brother, Where Art Thou?, it is often confusing to keep track of which concept the pieces are responding to. That said, the space is used effectively to ensure that the eye never stops moving from one visually interesting work to the next.

The gallery is only open until Saturday, so before leaving Pittsburgh for Thanksgiving break, take the time to experience the work of the talented students fostered in the College of Fine Arts. As first-year art major Emily Miller said to those invited to the opening, “Be a Vincent van Bro and Gogh.”