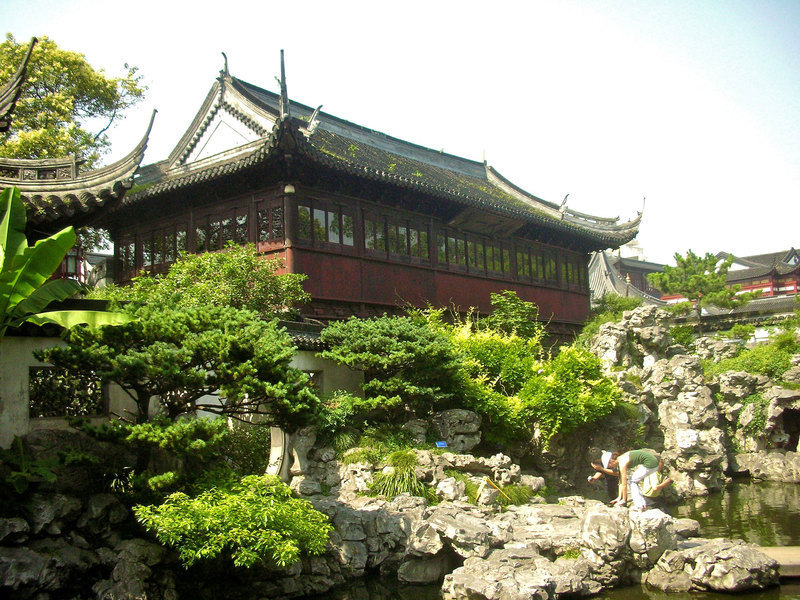 “Mai wan le! Mai wan le!” A Chinese woman hustled down the lengthy queue in front of a tiny but famous dumpling shop, known for serving up the best xiaolongbao — pork-filled dumplings that are Shanghai’s specialty — in the city. My friend Julia and I had been waiting with much anticipation but were filled with disappointment as we registered her words: The shop was sold out. The woman was handing out paper bowls to the people ahead of us, counting out the number of servings that could still be made, but as luck would have it, the last two bowls were handed to the man right in front of us.

Julia and I didn’t move. We had come a long way in an expensive taxi to Yu Yuan to taste these xiaolongbao — and now we just stared at each other, wondering what to do. Meanwhile, the man in front of us was motioning to a woman standing nearby — I assume she was his wife or girlfriend — waving his second bowl in the air and asking her if she wanted some. To our delight, she shook her head and the man then turned toward us and offered us the bowl, which we excitedly accepted and took several pictures to commemorate
the moment.

Since we were displaying quite openly that we were not native to Shanghai, our generous friend tried striking up a conversation and asked us where we were from. Now, although I have been learning Mandarin for the past two years, speaking it in a classroom and speaking it in China are two radically different situations. The Chinese don’t need to be patient with me, nor do they need to enunciate the four different tones in the language so that I don’t get
confused. They also don’t use the simple textbook sentences that I was used to. But, barring all these differences, my weeks spent in Shanghai had resulted in a drastic change in my understanding of the language. I was now familiar with making general conversation and since this entailed talking about where I was from, I was easily able to answer the question. The conversation tapered off and came to a definite end when it was finally our turn to receive a bowl of hot, steamed dumplings that Julia doused in vinegar. We grabbed
a spot on a bench by the lit-up courtyard and had our first taste of Shanghai’s xiaolongbao. It was excellent.

My trip to Shanghai was filled with many such firsts. It was the first time I was living in a country whose native language I was not fluent in, and the reality of this situation struck me the moment I stepped off the airplane at Shanghai’s Pudong airport. I was there for a four-week program to further my education in Mandarin thanks to a collaborated effort between Carnegie Mellon and Shanghai International Studies University. I had been warned by my professor at Carnegie Mellon that not many people spoke English in Shanghai, so I came completely prepared. I brushed up my Chinese and memorized the exact way to say Shanghai International Studies University Guesthouse to the taxi driver — I had been warned that if I said it wrong, he would take me to a completely different location. But as soon as the taxi driver asked me, “Nali?,” I was overcome by a fit of nervousness and mispronounced one of the words. I had to sheepishly hand him the written address to make sure he understood.

Shanghai, which literally means “on the sea,” lies on the coast of China and is one of the most developed cities in the country. It has a fantastic skyline dotted with towering skyscrapers that light up in brilliant colors at night — not unlike New York City. Unfortunately, due to the large amount of pollution in Shanghai, the sky remains overcast with smog very often and seeing a blue sky is a rare occurrence. Not all of Shanghai is as well developed as the commercial areas, however. The city can be quite hot, dusty, and dirty.

While in the city, I often felt like I was an animal in a zoo. The Chinese stared at me like they had never seen an Indian before. Many of them chattered about me in Chinese while I smiled to myself, too afraid to call them out. Others tried to speak with me, and were quite delighted when I replied to them in Chinese. My American classmates drew crowds too. Their seemingly unnatural height and golden hair caused passersby to even bizarrely click photos of them.

While life in China took some getting adjusted to, one of the biggest adjustments I had to make was regarding food. I am a vegetarian, but that concept is pretty alien to the Chinese. The closest word I could find to describe my dietary restrictions conveyed that I could eat vegetables and fish, so most of the time I would just end up translating “No meat, no fish!” Even though I am a vegetarian, I decided to taste some Chinese delicacies and got a chance to try Shanghai’s xiaolongbao, Beijing’s Peking duck, and a famous pork dish in Suzhou. Sadly, not every experiment was very satisfactory.

Towards the end of my trip, I actually started to think in Chinese. In one of my conversations with my mother, she asked me for a telephone number and for several seconds I couldn’t think of how to say the numbers in English. It is my dream to be fluent in Mandarin one day, and as I have experienced that the best way to learn a language is to surround yourself with it, I plan on making a trip back to China very soon.