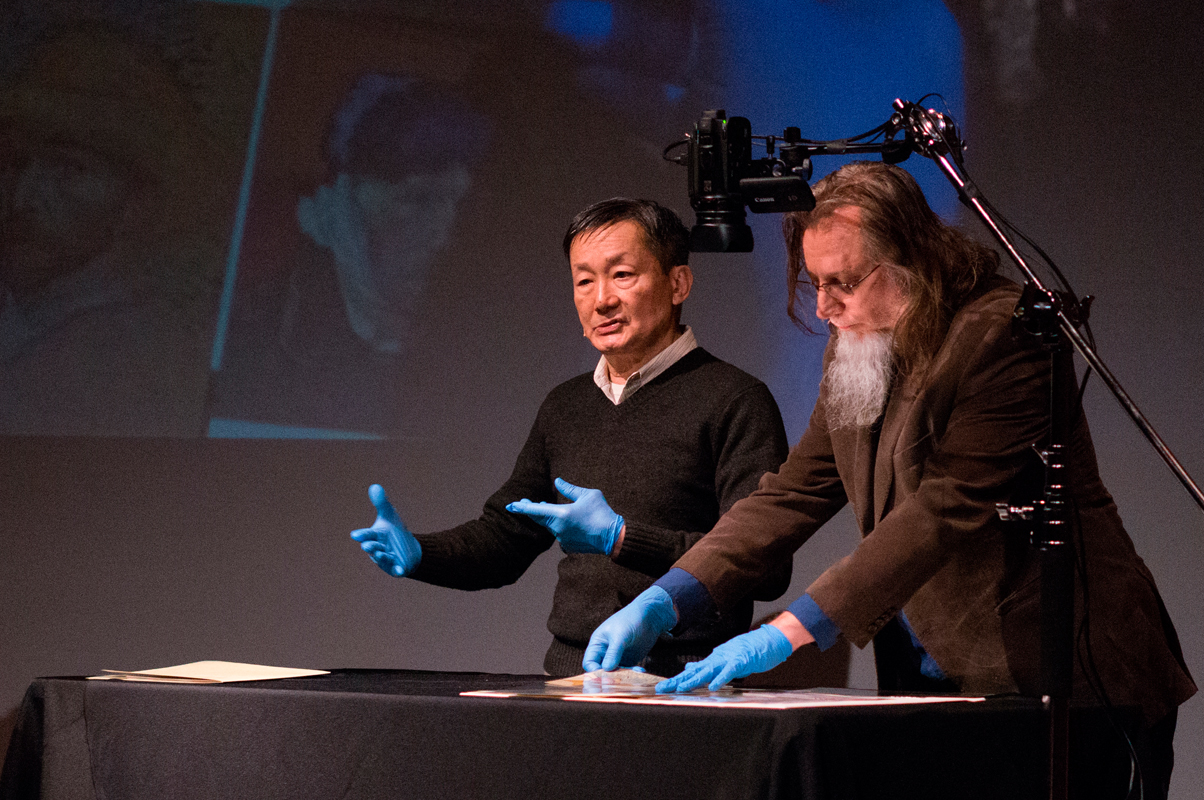 The Andy Warhol Museum opened Time Capsule 524 in Warhol’s 610-part series last Friday. This “Out of the Box” event was led by Warhol Museum chief archivist Matt Wrbican and Time Capsules Cataloguer Erin Byrne in the Warhol museum’s small theater. The real star, however, was special guest Benjamin Liu. Liu worked with Warhol for many years as an assistant, and provided commentary on the various items as they were pulled from the box.

The purpose of the Out of the Box series is not to open individual boxes of the Time Capsules series for the first time. They have already been cataloged and archived, and the documents and photos have been placed in Mylar sleeves inside of acid-free folders. Rather, the series is intended to show the box’s contents to the public, relive portions of Warhol’s life, and reflect on the era. Liu had not seen the contents of the box before the event. He was likable and excited to see the things that “Andy” had left. It was fun to see him refer to his old friend so casually. He reminisced when they pulled out a bag with mementos from a tennis tournament they had attended together, and Liu told funny stories about their group of friends throughout the evening, including one story about flying across the country on a converted toilet seat in a Lear jet.

Time Capsule 524 documents September to November 1984. Much of the contents were clothing, including special prints on t-shirts from Warhol’s contemporaries and members of his cohort. There were also letters and photos from friends and celebrities. Liu name-dropped so often that I lost count, and I only recognized one in every ten names or so. I did recognize Yoko Ono and Baron Philippe de Rothschild, both of whom had contributed items to this box, which is also one of the few with Warhol’s own writing on it.

While the subject matter was interesting, I found myself wishing the presentation had been more refined. The contents were gently unpacked by Byrne and handed to Liu, but the items were difficult to see from the audience, and Liu and Wrbican sometimes struggled to place them on the document camera. At times, Wrbican talked over Liu, and they often seemed to be competing in a weird way: Liu often responding from an anecdotal perspective, and Wrbican from a scholarly one. Still, Liu was entertaining and kept the mood light, and I appreciated what he had to say. Liu’s presence made the idea of Warhol’s life more believable, as much of the pop artist’s stories and experiences are extravagant and over-the-top. It was reassuring to have them confirmed by the anecdotes of a flesh-and-blood person.

The Andy Warhol museum was open late, and the Time Capsule presentation’s audience was then able to venture through the many floors of Warhol’s own work, photographs, and information from the rest of his life. This was helpful for putting the items from the box in the context of Warhol’s own work, relationships, and lifestyle. It was also helpful because names that had been mentioned so frequently in the presentation seemed to be recurring in the Warhol narrative, and some were even members of his inner circle. For those who haven’t taken the trip to Warhol’s museum, I highly recommend it. Beside his artwork, the photographs of Warhol in studio at Carnegie Tech and hanging out in Schenley with his friends are eerie and completely cool.

Part of the charm of the time capsules is that Warhol compiled them without including much of his own work; they’re a collection of items he liked and thought were important. For instance, an album signed by the likes of Roseanne Cash and Elvis Costello was placed in the time capsule, as was a signed napkin from one of his favorite restaurants and a slew of Julio Iglesias Long Play records. In Warhol’s legacy, so much emphasis is placed on his own work that it was exciting to see his inspiration instead.