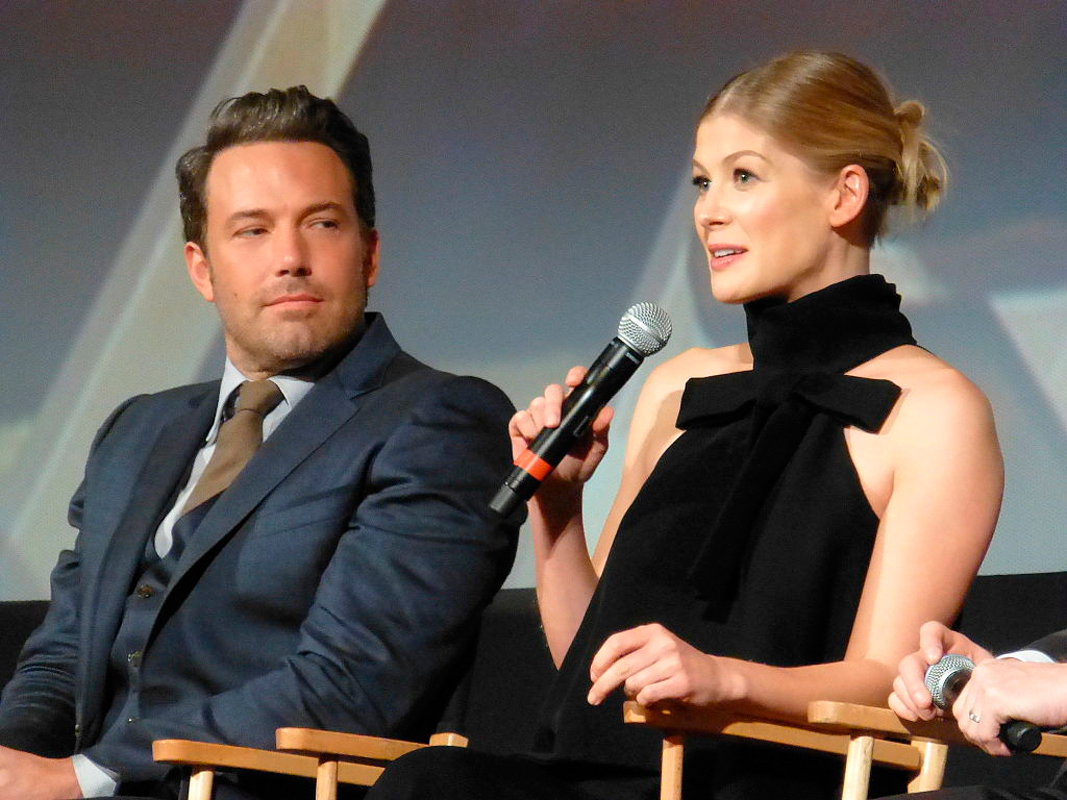 Pike has talked extensively about her surprise at the direction her career has taken, and her success in the field. (credit: Courtesy of aphrodite-in-nyc via Wikimedia Commons )

This year’s Academy Award list of Best Actress nominees reads like a well worn catalogue of Hollywood’s most established talents. Nearly every leading lady in the running has been nominated for an Oscar before, and some have won as well. There is one exception to this trend though — Rosamund Pike. Pike was nominated for her stunning portrayal of Amy Elliot Dunne in Davd Fincher’s Gone Girl. Amy is a demanding character to play — serene, collected, and charming on the surface, but a narcissistic sociopath on the inside. Rosamund Pike is a stranger not just to the Academy Awards, but some would argue to Hollywood itself. As the emotional core of an all-lights-flashing Hollywood juggernaut, she takes on a role that one would typically expect to go to an Angelina Jolie, or an Emily Blunt, or Pike’s co-nominee Reese Witherspoon. This makes it all the more remarkable, or perhaps explains why she plays Amy with the unique blend of subtlety and hysteria that she does.

Pike has had something of an on-off relationship with Hollywood for the past two decades. A natural actor right from the start, and incredibly bright to boot, she started her undergraduate education in English at Oxford, only to drop out halfway through and try for drama school. She returned to Oxford eventually, chastised by the entire experience, since no drama school wanted her.

Her next big brush with Hollywood was a few years later, when, out of nowhere, she was cast as Bond Girl Miranda Frost in 2002’s Die Another Day. An innocent newcomer to the industry, she was cast opposite Pierce Brosnan and Halle Berry in a commercial film. This must have had a massive psychological impact on her highly impressionable recent-college-graduate self at the time.

One would assume she’d use a massive Bond movie as a launchpad into Hollywood central. Instead she did quite the opposite: She disappeared for nearly two years. Even when she returned in 2004, it was for a small independent Israeli film called Promised Land. And thus Pike proceeded for nearly the next decade, taking on a small indie film every once in a while, doing a documentary or two every now and then, and very occasionally taking on supporting roles in mainstream cinema such as 2005’s Pride & Prejudice, or 2012’s Jack Reacher. And even though she never entered the big leagues of Hollywood, she was always reputed as a brilliant actor, if not a star. For example, she received rave reviews for her performance as the stunning, if adorably silly, Helen in 2009’s An Education.

All of this changed, however, when David Fincher cast her in Gone Girl last year. Here she was, being asked by one of the greatest directors of the past decade to carry the emotional weight of one of his most challenging projects to date. To hear her say it, she was more surprised than anyone else at being cast. In an interview with The Guardian, she openly ponders why she deserved the role of “Amazing Amy” over the queue of higher profile actresses who would have traded a limb to be in her place.

Looking at her filmography, one can see her pulling off “cool and collected” Amy without breaking a sweat. Her natural porcelain features, not to mention her voice, can easily charm an audience, or her movie husband Nick (Ben Affleck), into a peaceful trance. Where you really come to respect Rosamund Pike for her craft is further on in the movie, when circumstances force Amy into desperation, and into getting her hands dirty in ways she wasn’t planning on. Uptight, charming Amy is a direct reflection of Pike’s own aloofness. When the charm recedes and is replaced by sociopathic narcissism, Pike really shines as she discovers a darker side of herself that I’d be inclined to believe she didn’t previously know about either.

Gone Girl is undoubtedly one of the coolest, most devastating movies of the year. And if box office registers are to be believed, it is also one of the most successful, having made $368 million worldwide. Suddenly, a generation that had no idea who Rosamund Pike was is now eagerly watching her every move. After nearly two decades in the industry, Rosamund Pike has finally arrived.