My Fair Lady puts everyone in a good mood 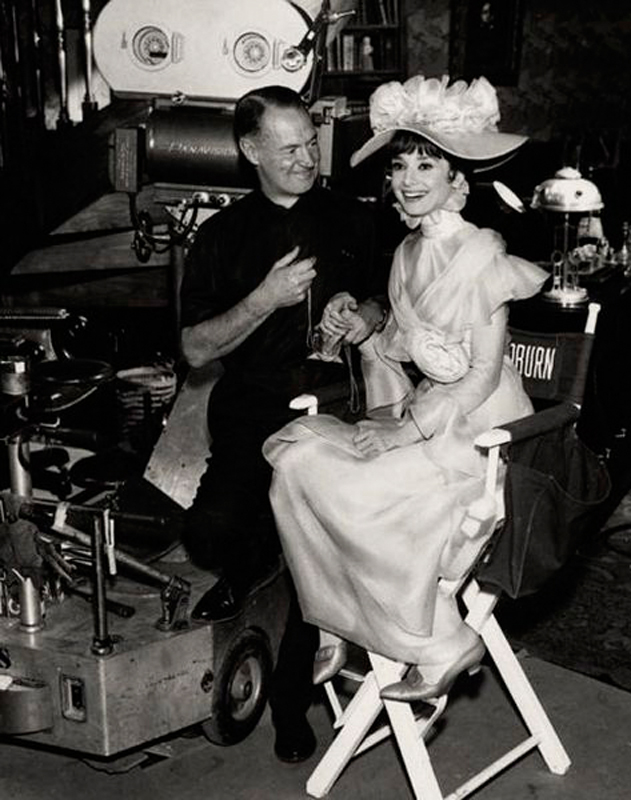 Audrey Hepburn, pictured here with cinematographer Harry Stradling, is largely credited with bringing My Fair Lady into American homes with her charming portrayal of Eliza Doolittle in the 1964 film. (credit: Courtesy of Warner Bros. via Wikimedia Commons)

Dear reader: I hate musicals. Their corniness, cheesiness, and general pep usually makes me want to run screaming from the theater. But the production of My Fair Lady currently showing in the O’Reilly Theatre, for all its froofy looking posters, is actually kick-ass. Do you like witty jokes? Do you like cleverly cloaked social commentary? Do you like stupidly catchy songs? If you said yes, no, or maybe to any of these questions then you should go buy your ticket right now. I’ll wait. Go. Right now.

Done? Good. If you had waited till the end of the article you may have missed it. Now that all that is taken care of we can get down to business. Anyway, you’re probably curious what you just signed up for.

As the curtain rises we meet Eliza Doolittle (Kimberly Doreen), a homeless flower seller outside Covent Gardens in London. As she peddles her sad flowers to the exiting opera attendees, we meet Colonel Pickering (John Little) and a curious man who seems to be an undercover cop watching the homeless. In fact this is Professor Henry Higgins, played by Benjamin Howes, who is analyzing the speech patterns of the London homeless. Colonel Pickering, also a professor of phonetics, enters into a bet with Higgins on whether the cocky Higgins can turn Eliza from a street rat to a duchess (and trick all the British aristocrats in the process). The rest of the musical consists of the hilarious failures and successes of their ambitious plan.

The set is fantastic, especially given the interesting arrangement of the O’Reilly Theatre. Because the theater lacked a curtain, all scene changes had to happen within the view of the audience. But in aristocratic England, what could be more fitting than butlers changing chairs as the characters move from Covent Gardens to Higgins’ home to Ascot and beyond? The two story wall of library books, which makes the backdrop, highlights the lightly intellectual nature of the show. The staging of the first scenes outside Covent Gardens seems a bit contrived, but as the musical progresses the actors develop an excellent rhythm and their movements become natural once they leave the first scene.

Little and Howes both shine as the colonel and the professor, respectively. Doreen, as Eliza, knocks it out of the park. She glides seamlessly between the many accents Eliza takes on throughout and continues these into the musical numbers. Speaking of the musical numbers, Doreen has one of those knock ‘em dead voices that shines in the role and makes “I Could Have Danced All Night” a smash hit. But Eliza’s ne’er-do-well father, played by Bill Nolte, almost steals the show. Nolte’s brilliant comedic timing and rich, deep vocals make the show go from really, really good to really, really, REALLY good. Like, really.

The rest of the ensemble is also smashing. Powerful vocals and subtle hilarity in their actions make you smile throughout, like the staging of “Ascot Gavotte,” which highlights the insanity of the British aristocrats. Part of what makes the performance so wonderful is that no one is safe, be it street rat or duchess, as the play makes a bit of a fool of everyone. In the process of providing the audience with aural and visual entertainment, as well as frequent comedy, the production brings up a brilliant social commentary just as accurate today as it would have been 60 years ago when it first hit the stage.

If you leave the show without a smile on your face I would consult a physician — your funny bone might be broken. Aren’t you glad you got your tickets already? You’re welcome.

My Fair Lady is in the O’Reilly Theatre until February 22nd.