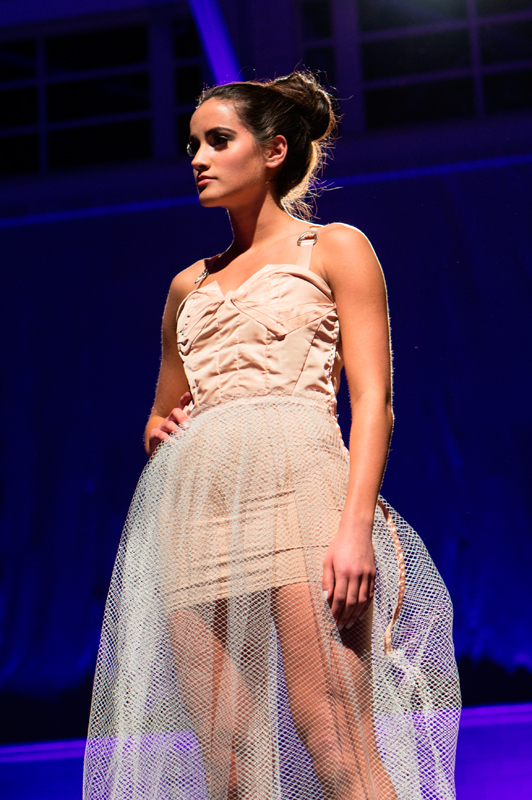 Lunar Gala — the annual student-run, student-designed, and student-produced fashion show — pumped Wiegand Gymnasium full of fog and thumping beats on Saturday. The theme was Vestige, marked by broken-looking, 8-bit text and trippy, stuttering images on the screens behind the runway. The (admittedly very difficult to read) program was a list of the lines’ titles and designers in Vestige’s signature broken font.

This year’s models were top-notch, reflecting the hours of rehearsal dedicated to Lunar Gala since the beginning of the fall semester. The producers of the show also outdid themselves, with on-point lighting and evocative music.

Many of the lines in Vestige matched Lunar Gala’s traditionally edgy aesthetic, like one that featured industrial metal work inspired by the torture devices in the movie Saw, (“Mashinka” by human computer interaction and architecture double major Madeline Chen and fourth-year architecture major Jean Kim) or another that showed models with geometric, origami-like garments meant to mimic the interiors of geodes (“Lustre,” by third-year architecture majors Rehan Butt, Alyssa Hamilton, and Carolina Tamayo).

Sometimes Vestige got a little too edgy for it’s own good — one line (“Uncover,” by math and art major Laurel Michel-Schottman) was made up of business casual clothing for women with puzzling, transparent cutouts. Another line, “The Wealthy Slums,” by first-year undeclared Dietrich College student Lanre Adetola, took boho-chic perhaps too far with patchwork clothing that, according to the event’s program, was “the artful amassing of discarded clothing and fabric scraps.”

Some designers also trended toward whimsical and colorful, like senior design majors Emmy Hacker and Chanda Patel’s “Cakery,” which was “inspired by the elaborate shapes and decorations of high-end cakes.” Models in the line strutted to the beat of Fifth Harmony’s “Sledgehammer” — in contrast to the EDM and liquid dubstep backing the rest of Vestige — and showed off their glitter-coated lips and jewel-toned outfits. “Mas-querade,” by senior design major Keith Joseph, was inspired by Trinidad’s carnival and had models in summery, brightly patterned dresses and shorts.

Lunar Gala also had interludes by several of the university’s dance troupes, including Soulstylz, Infra, and Bourgeois. The dancers did a good job with the unusual stage of the right-angle runway, and complemented the show’s theme.

This year’s Lunar Gala was, if possible, bigger and more hyped than last year’s show. It continued a long Carnegie Mellon tradition that lets students strut their stuff, literally.