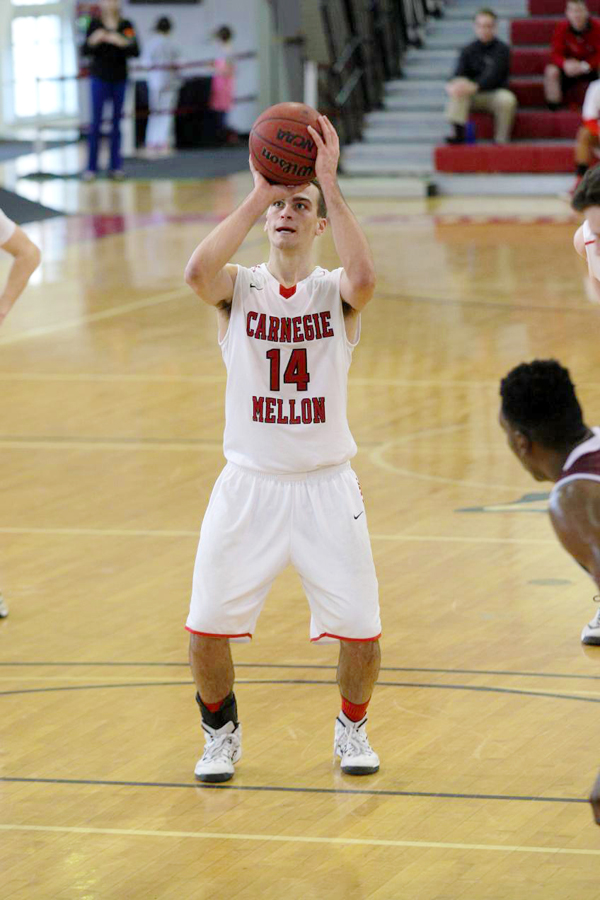 Cordts sets up as he takes a free throw. (credit: Courtesy of Carnegie Mellon Athletics Department) 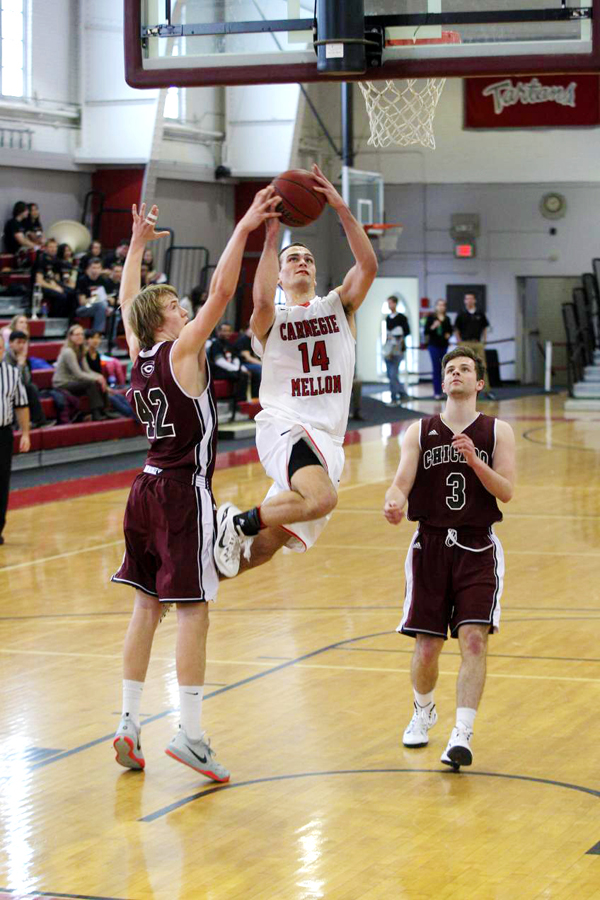 Seth Cordts splits two defenders for a layup against The University of Chicago. (credit: Courtesy of Carnegie Mellon Athletics Department)

It is no easy feat to captain a team from a slump to back-to-back home wins. What makes this accomplishment even more eye-popping is that the last back-to-back home wins occurred 5 years ago, and this time around, both games were won by double digits against teams that are highly ranked. For senior guard Seth Cordts, doing all of the above was not impressive enough, as he went on to be the leading scorer in both games. In his time off from being a basketball hero, Cordts is on the verge of completing his B.S. in mechanical engineering and biomedical engineering — a degree that in and of itself is a phenomenal undertaking.

Cordts’ foray into sports began way back in the second grade in his elementary school league with baseball, soccer, and basketball. Soccer piqued Cordts’ interest for his first few years, but he eventually succumbed to the influence of his older sister and her own basketball exploits. By the sixth grade Cordts was reporting to a school coach, having been coached by his dad up to that point. He greatly credits his first school coach for providing him with a strong foundation in the sport. This foundation is visible in Cordts’ incredible fundamental understanding of the game and the strength of his base skills. Cordts basketball journey had begun and much like his shooting streaks, there is no stopping him once he starts.
Meanwhile, Cordts’ interest in technical hands-on projects was pushing him down the mechanical engineering track. Consequentially, watching his sisters incur basketball injuries (like torn ACLs), he began to wonder about the ability of technology to help people recover from sports injuries. As one can see, Cordts was not just concerned about his impact on the court, and always focused on developing all aspects of his personality.

Simultaneously, his improvement over the years was almost magical. He went on to play varsity basketball at the high school level for Souhegan High School in New Hampshire. He capped his colorful high school career by being appointed to captain of the varsity team and voted to the First Team All-State. Cordts turned heads with his basketball prowess and one of the heads that he turned just happened to be Carnegie Mellon’s then-assistant basketball coach Justin Jennings. It was during a “Hoop Group” showcase that Coach Jennings spotted Cordts and recognized his immense potential. Jennings approached Cordts and they talked about basketball at Carnegie Mellon. It was from then on that Cordts started looking at Carnegie Mellon as a strong option to pursue his education and basketball.

It is common knowledge that college basketball is faster, more physical, and a lot more competitive than high school basketball. Cordts, however, did not shy away from the challenge, and exhibited great tenacity in his freshman year by sticking with the sport and changing the way he played to become a more dominant figure on the court. He also did not give up on his desire to use technology for the betterment of athletes and began pursuing his dual major in mechanical engineering and biomedical engineering. As usual, Cordts would be active in all spheres of his life and when asked about his favorite memories at Carnegie Mellon (barring the dazzling memories he has on the court) his mind jumps to all the times he went paint balling and white water rafting with his friends.

Although Coach Jennings was no longer at Carnegie Mellon when Cordts arrived, Cordts found a mentor in Carnegie Mellon’s then-assistant coach Andrew Garcia. Coach Garcia helped Cordts understand his role on the team and the importance of leadership. This was reinforced by the example that Cordts’ seniors set, and, when coupled with his work ethic and dedication, his tremendous success as the Tartans’ captain comes as no surprise. Cordts’ relationship with fellow teammate and roommate Matthew Loebbaka has been a mutually nurturing one and is one that Cordts deeply treasures. As teammates, they support each other on and off the court and as roommates they share a connection that goes beyond basketball well into other areas of college life.

When asked about how he manages basketball alongside his double major Cordts explained the importance of time management and of avoiding mixing one with the other. According to Cordts, wins and losses on the court make it hard to focus on the week’s homework and vice-versa, so he tries to keep a divide between them mentally. It is no secret that at Carnegie Mellon the burden of work increases exponentially as one climbs from freshman year to senior year. Therefore it is only natural to expect basketball to take a back seat more often in later years. Yet Cordts went from scoring 6 points in his freshman year to scoring 363 points this year (and the season is still not over). While these numbers have some great stories behind them, the one that Cordts holds most dear is the story of his away game at New York University last year. Having shot 100 percent from behind the arc, Cordts shot the game-tying three points with seconds left on the clock, in front of a massive audience. It’s obvious now why Cordts’ favorite drill during practice is the shootout between the guards and the centers, and for the first team to get 10 baskets from the elbow, wing, baseline and behind the arc.

Cordts has had multiple pillars of support and motivation over the years. Having numerous siblings that play basketball alongside a supportive and loving family has kept Cordts on track even during the toughest of times. Cordts’ father flies out from New Hampshire to watch every game, acting as a great source of reassurance for Cordts, who also spends hours off the court talking to his dad about basketball and life. Cordts has always looked up to his idol Kevin Garnett, forward and center for the Brooklyn Nets, for his passion about the game and the reasons that he plays it. Cordts’ high school coach Sudi Lett was a huge influence and his words of “Do your best and leave the rest” will forever instill confidence in Cordts in his personal abilities.

While this season has had its ups and downs — the Tartans have gone from winning against ranked universities to losing to weaker universities — Cordts has done his best to keep his head down and pull his team through, and indeed he has done a marvelous job. It has been a pleasure to follow his basketball journey, and if the past is any indication, he will keep rising as a person and as a player.