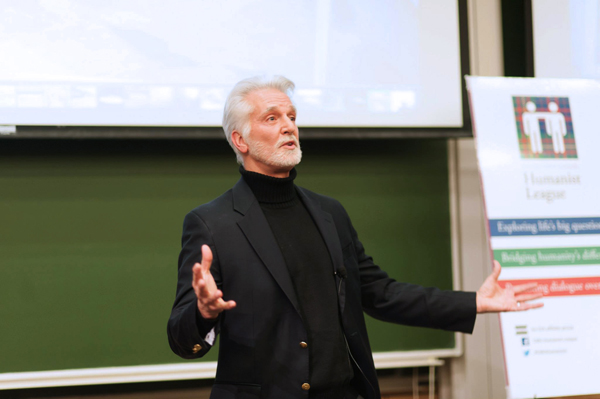 Science writer Chip Walter spoke at Darwin Day, a Humanist league lecture, about evolution and how the study of evolution could affect the future. (credit: Nathaniel Fruchter)

On Charles Darwin’s 206th birthday, Pugwash attended a Humanist League lecture where science writer Chip Walter discussed human evolution. Evolution was very controversial during Darwin’s era. Like all novel discoveries that contradict pre-existing ideas, the theory of evolution offended many people, particularly those whose religious beliefs led them to believe in creationism: the theory that God created the earth and human existence in seven days. However, the theory persevered through the decades.

The first question Walter answered was, “Why are we here?” There have been 27 recorded species of human on the planet since its creation. However, the only species to survive was Homo sapiens sapiens, humans as we know them today. Many people believe that today’s humans are the result of a long chain of evolutionary development that spans several species. Aristotle called this the “chain of being” where each species did not have contemporaries, but led to the next, more developed set of humans. There is evidence today to prove this is not true. In fact, different human species competed for much of their existence resulting in Homo sapiens coming out on top.

What is even more strange is that Homo sapiens were neither the strongest nor the smartest human species during a time in which others existed. There is sufficient evidence to suggest that Neanderthals were larger and had larger brains. However, human nature supported the formation of small groups that were good at communicating, which meant that the group could survive as a whole. Walter proposed that the most important invention of humankind is the symbol. Humans are unique in that we are good at communicating with one another, and symbols — such as art and characters — allow people to express their thoughts in even more ways.

Walter then stressed the importance of the discovery and study of evolution. Not only does it allow us to learn about our past, but it can help us make advances in the future. Knowing how humans developed communication, creativity, and emotions is vital to understanding how to improve our future. Humans are capable of complex thoughts, and Walter emphasized that we should use this ability to learn from our mistakes and see how we can improve humanity as a whole. Walter also pointed out that traces of Neanderthal and other extinct human species remain in our genes, which shows that evolution is still affecting us in the modern world.

Despite hundreds of years of research into evolution, creationism and anti-evolution theories are taught in public schools. Walter stressed that learning about the history of evolution is important in understanding who we are today. Do people who reject the theory of evolution have an enormous gap in their education? Should we cease the teaching of creationism and similar theories, or do we give people the freedom to believe what they want to despite overwhelming scientific proof that their theories are incorrect?