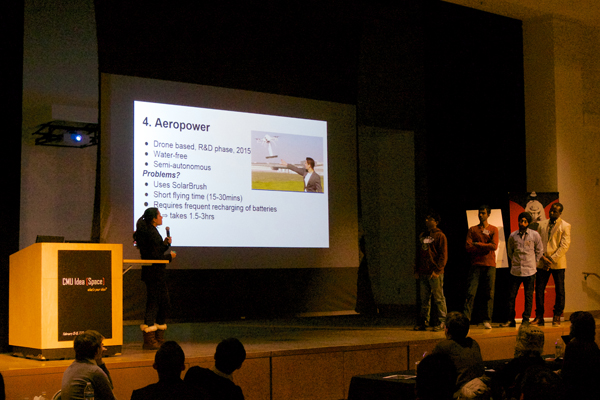 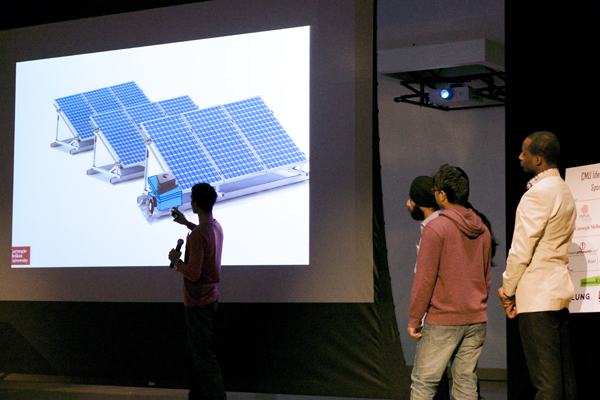 Since its founding in 1900, Carnegie Mellon University has become home to seven independent colleges with esteemed programs ranging from the sciences to the fine arts. Yet even with the availability of interdisciplinary programs, many Carnegie Mellon students find it hard to branch out of their college. At the same time, the solutions to many real-world issues — from climate change to educational gaps — require the use of skills that span disciplines.

This issue helped to create the vision behind CMU Idea [Space], a competition that started last Friday and lasted through Sunday. In its first year, the competition brought together many Carnegie Mellon graduate student participants, representing all seven schools, as well as numerous judges and volunteers. The event was designed so that participants had the opportunity to meet new people, particularly students from different colleges.

Prior to the competition, participants were given the chance to submit problem statements for the competition on Reddit, which served as an online voting system. After a reception and lecture at the Posner Center, located in the Tepper School of Business, those participants had the chance to present their problem statements to the entire group. Groups of participants from different colleges were formed based on the ideas that had interested them most. Over the weekend, members of groups collaborated in creating a solution that incorporated multiple disciplines. Students were also allowed to receive help from mentors and other outside sources, provided that they do their own work.

“I want people be creative,” said Alex Brown, a master’s student in business administration, who served as the founder and lead coordinator of the event. “We don’t provide any guidelines on what the deliverable needs to be, which could be anything from an mobile application, to a mock toy, to a powerpoint presentation.”

Kera Bartlett, a fellow MBA student, was asked by Brown to the project manager of the event. “I think it’s very important to be open minded and realize that you have one way of looking at an issue or a problem. Your way may be very different from the views of people on your team,” Bartlett said. “So it’s also important to not get too attached to your perspective.”

In fact, the challenges in facilitating such collaboration between students of different programs was what Alex had in mind for the event.

“One of the things that I’ve worked on while I was a president was trying to figure out ways for Tepper School of Business kids to develop relationships with other schools,” Brown continued. “I realized, during the process, that other schools had similar concerns or similar experiences as Tepper.”

In the past, Brown was awarded two grants from the ProSEED Crosswalk, a Carnegie Mellon program designed to encourage development of ideas in their early stages. “One of the grants was for developing a new competition with the objective to bring graduate students closer together,” said Brown. “So once the grant was approved, I started planning and just last year I developed a team to for the event. We decided what would be the best thing to work on, and we started throwing ideas out of how it would work.”

Collaboration for the event had occurred months before February, including over winter break. Throughout those months, Brown was able to find like-minded students from Tepper’s two-year MBA program to help tackle the project, including Bartlett.
Despite a tight deadline, the planning team was able to find sponsors that were eager to support their goal. These sponsors helped to fund the monetary prizes for the top three teams. In addition, UpPrize, a collaboration between BNY Mellon and the Forbes Fund, provided a million dollar incentive, which would be awarded sometime after the event, for a team that was serious about taking their projects to the next level.

“If some of the fruitful projects come from our competition, they can turn into something that becomes materialized down the road, because of the partnership we developed with our sponsors,” Brown explained. Some of the judges also came from these sponsors, including Matt Zieger of the Forbes Fund, who served as a guest speaker and judge.

On the last day of the event, participants could continue working on their project until the submission deadline of 11:30 a.m. After lunch and another guest speaker, the teams had the chance to bring their projects to the spotlight. During the presentations, judges scored the team based on how innovative and holistic each solution was.

The event produced a wide range of interesting projects. One of the teams mapped a way for cheap and highly efficient renewable energy to be generated from garbage and landfill waste. Max Kiefer, who was one of the members of the team, had actually submitted the idea on Reddit. Kiefer studies environmental science in the Mellon College of Science.

“Initially I had developed the idea beforehand, for my company. Some of the initial challenges were finding ways to create energy from toxic and pollutant gases. Also, we had to figure out what we were going to do with the gases after they have been used for energy purposes” explained Kiefer.

With the knowledge and problem-solving skills that each problem statement demanded, many participants had found the event to be a meaningful academic and social experience.

A mother as well as student at Tepper, Jin Zhang was able to bring her passion of improving math education to the event. Although her group had only two members, Zhang and Garrett Hemann, also from Tepper, it won third place. They advocated for the improvement and increased availability of apps and toys that would help children start learning math before preschool.

“The result of this event was fabulous. Everyone probably worked day-and-night. For me, the event helped me to network with people, and shop my idea.” said Jin. “This event was also a great way for me to see the ideas that other people had.”

A Heinz College student, Pavneet Singh Kochhar, and his team worked on creating automated cleaning and maintenance of solar panels, which often accumulate dust that reduce the efficiency of its function.

“It was a good learning opportunity for all of us.” said Kochhar. “It gives us an opportunity to mingle with different people from all over campus. You could be here for six months, and still not know so many people.”

With the enthusiasm of this year’s participants, it’s no wonder that the organizers of the event intend on continuing CMU Idea [Space] next year, with plans of having having some of the current participants join the planning team of 2016.

“It’s a fun way to spend the weekend,” Bartlett said. “It’s very intellectually challenging and it stretches our comfort zones in terms of working with people from a lot of different backgrounds.”