How Things Work: How money is printed 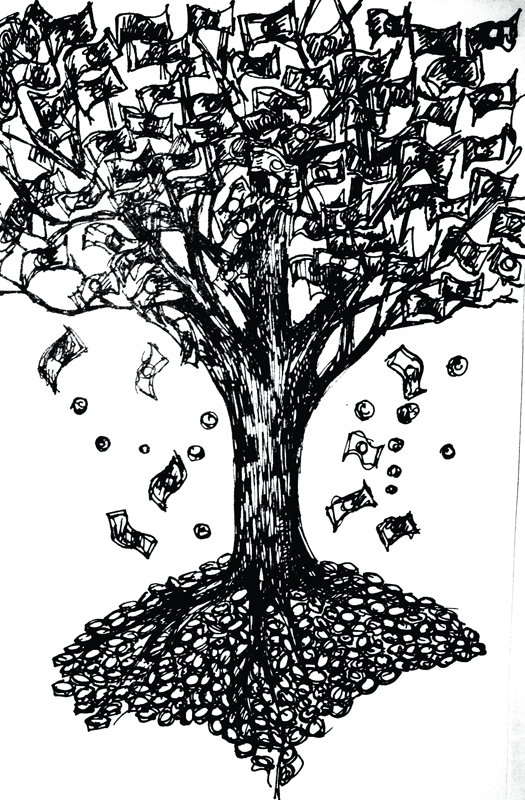 How is money made today? Why does money have that distinctive “dollar smell”? Why does a $1 bill feel different from normal paper? Many people have pondered these questions, but few actually know the answers. Currency circulation is a critical part of a country’s economy. The U.S. dollar (USD), an internationally recognized currency, plays an especially important role in people’s daily lives. Yet the question remains: Who prints money, and how?

The Bureau of Engraving and Printing (BEP), part of the U.S. Department of the Treasury (DOT), is one of the largest currency printing operations in the world. It was founded in 1862, when currency was printed and separated by hand-cranked machines, but modern technology has enabled a far more efficient and secure way to do this. The notes have been redesigned over the past decades so that they not only retain the traditional American look and feel, but also contain an increasingly sophisticated portrait watermark and a 3-D security ribbon to prevent counterfeit notes in circulation.

The ordinary paper that we use for printers or newspapers is made of wood pulp. Pulping breaks down the bulk structure of the fiber source into constituent fibers, a desired attribute for papermaking. The thick fiber board can then be shipped to a paper mill for further processing.

However, the paper and ink used in the production of USD bills is as distinct as its design. Currency paper is specifically made for the BEP by Crane Paper Company (Crane & Co.), and is composed of 75 percent cotton and 25 percent linen. This three-to-one ratio is one of the most important reasons for the unique look and feel of the dollar bill. Currency paper also sports its own unique ink. All bills utilize green ink on their backs and black ink on the faces. All the inks appearing on U.S. currency are specially prepared, formulated and blended by the BEP itself. To ensure security and quality, the BEP implements continuous testing on the ink and paper.

The design of currency is less mysterious than it seems. The designers at the BEP usually develop many versions of the overall look of the paper currency before one of them gets approved by the Secretary of the Treasury. Many factors go into the design of paper currency, one of which is whether the design incorporates a dignified image to properly reflects the strength of the American economy.

The most complicated part of printing currency is the offset printing operation, which allows for indistinct background colors to improve the security of the bills. First, the photo engraver must duplicate the images from the designers over a plate layout. A high-resolution film recorder separates colors onto different sheets of film in negative form. A thin sheet of steel with a light-sensitive polymer surface is then covered with the film and exposed to UV light. This process must be absolutely accurate; the intrusion of even a single dust particle can affect the overall printing quality, in which case a new plate will be manufactured. Each background image has a seperate plate. In the next stage of offset printing, the background colors are printed by the huge 50-feet long, 70-ton Simultan presses. The sheets of paper, after printing, are stored to dry for 72 hours.

After offset printing comes the engraving process. This is an important part of printing currency because this is where the designer’s sketches will be transformed into 3-D engravings. All elements of a note, like portraits and vignettes, must be engraved on separate steel dies, a type of manufacturing mold. Individually engraved elements on steel dies will subsequently go through siderography, where multiple elements are transferred to a single printing plate, which is then given to plate makers to create hundreds of identical duplicates by electroplating. The plastic master is sprayed with silver nitrate so that it becomes a conductor. The chemical process produces a nickel plate, called “alto,” after one day. It is then inspected carefully by engravers to make sure it is an exact replica of the engraved die they produced earlier.

Finally, it is time for the bills to be printed. Currently, the BEP uses Super Orlof Intaglio (SOI) presses. These high-speed presses are employed to print the green engraving on the back of U.S. currency with a speed 10,000 sheets per hour. The sheets are then allowed to dry for 72 hours, after which they are separated for further processing (like face printing, which is followed by another 72-hour drying period).

After the printing is complete, the rest of the process involves examination and inspection. The Upgraded Offline Currency Inspection System (UOCIS) will use computers, cameras and sophisticated software to analyze the untrimmed printed sheet and monitor its color and ink density.