Fifty Shades of Grey painful for Ana and audiences alike 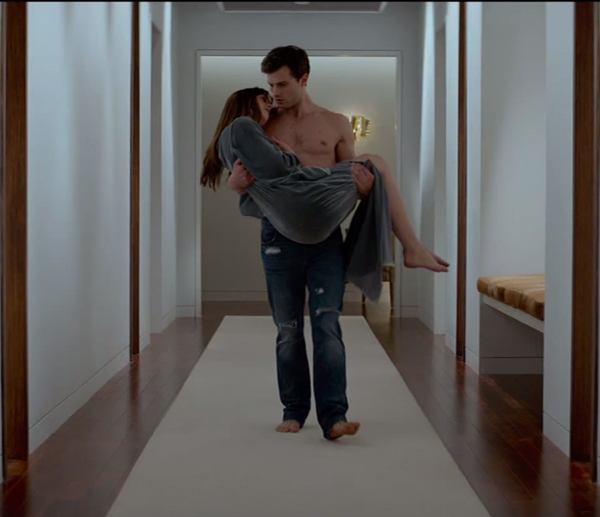 Though melodramatic and poorly executed, 50 Shades of Grey managed to pull in a whopping $81.7 million this past weekend, perhaps due to its convenient Valentine’s Day release. (credit: Courtesy of Unversal Pictures UK Trailer )

Fifty Shades of Grey was exactly what you’d expect. I’ll admit before I get into the nitty-gritty of the movie that I didn’t read the book, but I think in this case that may have been to my advantage.

Erika Mitchell first published the books under the pen name E.L. James; the novels were born of an overgrown Twilight fan fiction. Fifty Shades of Grey is a lot like Twilight in more ways than one. Both are made up of a string of painful romance novel clichés: both are set in the rainy-but-beautiful Pacific Northwest; and both feature a shy girl who falls in love with a powerful man. Both have also sold more than 100 million copies worldwide.

Just the names of the movie’s protagonists — Anastasia Steele (Dakota Johnson) and Christian Grey (Jamie Dornan) — tell that you this is going to be at least as painful to watch as anything based on a Nicholas Sparks novel. Anastasia, or Ana, has everything the perfect ingénue needs: She’s bookish, shy, virginal, and drinks tea. Christian Grey, on the other hand, is a powerful 27-year-old billionaire with a mysterious and dark past that left him only able to find pleasure as a “Dominant” (the Dominant, as it sounds, is the dominant partner in a BDSM relationship, which leaves Ana as the “Submissive”).

The central conflict of the movie comes from a contract that Christian wants Ana to sign, a contract that outlines everything from what he can do to her sexually in his “playroom” (which Ana refers to as the “red room of pain”) to how many times a week she has to go to the gym and what she can eat. Ana is, understandably, a little reluctant. Christian pushes her to the limits of her tolerance, admitting near the end of the movie that he’s “fifty shades of f***ed up.”

If you’re seeing Fifty Shades of Grey for the sex, you probably won’t be disappointed — the movie features over 20 minutes of R-rated sex, and both lead actors are beautiful by almost anyone’s standards. The plot, however, is lacking, mostly because it is essentially nonexistent. The movie limps along as sex scenes are linked together with droll dialogue and some admittedly nice, if boring, aerial panoramas of Seattle and Vancouver. Christian’s character is often laughable; it is hard not to giggle when he leans over Ana’s bed, shirtless and sweaty from a workout, and powerfully yet “erotically” takes a bite of her buttered toast.

Ana, too, is a painful caricature of an innocent English literature major. Ana’s roommate remarks that Ana seems different after she loses her virginity to Grey, because E.L. James apparently thinks that losing your virginity changes you fundamentally as a person, a myth that feminists have been fighting for decades.

If you’ve seen the trailer of Fifty Shades of Grey, you’ve already seen all the one-liners that make the movie entertaining at times. (“I don’t do romance. My tastes are very singular.”) On some levels, this movie wasn’t any better or worse than your run-of-the-mill bad romance movie, à la The Vow or Twilight. That doesn’t mean it was good, by any means, but it appeals to a certain demographic and has its place on a rainy Sunday afternoon. However it’s hard to ignore all the more deeply rooted ideological problems of the film, the ones that delegitimize the BDSM community and make Christian Grey’s abuse seem like romance. These facets of Fifty Shades of Grey take it from laughable to almost intolerable.