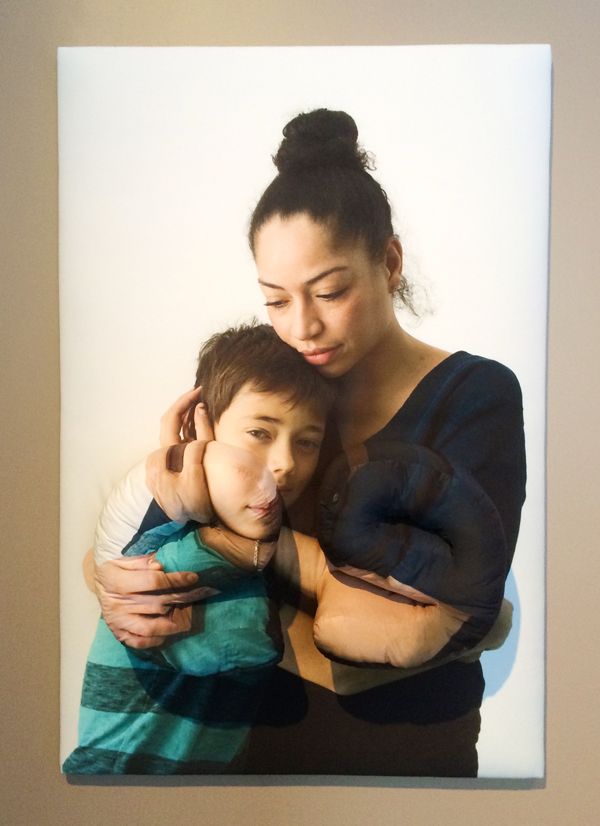 Fabric piece “Feel Images (Hug)” contributes to the eerie feel of the exhibit with its paradoxical representation of empathy and distance. (credit: Rachel Cohen/Staffwriter)

The title of the Carnegie Museum of Art’s newest exhibit is maybe half accurate. Certainly distant, not very much of a feel.

The exhibit’s opening was preceded by the Gulf Tower Project, Wednesday through Friday of last week, an event which harnessed the emotional content of social media to produce fluctuating visual displays. Using an Instagram feed of posts from local users, Catala’s project coded each post as emotionally positive or negative and generated green or red light atop Pittsburgh’s Gulf Tower beacon according to the general mood of the city. The artist also gave a lecture at Carnegie Mellon’s Miller Gallery on Wednesday to discuss the exhibition.

The dominant series on display features four fabric-printed photographs — “Feel Images,” as they’re titled. The photographs themselves are intentionally bland and unremarkable — the kind of sterile, posed, Thinkstock-imitation images we’re primed to see on billboards and in larger-than-life ads in airports: In “Feel Images (Hug),” a woman and boy gently embrace; in “Feel Images (Feel),” a sad and anxious-looking man gazes straight at the camera. In “Feel Images (Distant),” a man checks his iPhone, his body slouching away from the camera, the cell phone creating a sort of barrier between cameraman and subject. And finally, most puzzlingly, “Feel Images (Forest)” is an Instagram-worthy unfiltered photo of fern-filled forest greenery.

But aside from the fact that they’re printed on fabric rather than canvas, there’s something unusual that binds each of these pieces: Fabric bubble letters protrude from each of the images like oddly shaped couch cushions. The word “feel” distorts the nameless subject’s chest in “Feel.” The word “distant” crowds the image of the iPhone-bound man. And most curious of all, a pair of uppercase E’s (the second reversed to face the other in eerie symmetry), make the image look fake, distorted, even comical.

The double E symbol is a recurring image throughout the exhibit: At the center of the room stands a lone aquarium, the size of a fish tank in a dentist’s office. The double E, blown up to larger-than-life proportions, stands studded with shells and coral in the tank, circled by small, bright, tropical-looking fish. The setting makes the letters look worn and ancient, and it’s strange to see such an artificial object overgrown with life — reminiscent of images of the Titanic’s wreckage.

Aside from the aquarium, the most prominent display is a video titled “Empathetic Paul” — in which, according to the piece description, “the young alter ego of the artist appears in a series of ‘screen tests.’ ” Responding to a number of invisible and inaudible cues, an adolescent boy imitates a range of emotions: agitation, sadness, happiness, fear.

Between these iterations, he collects himself to recite emotionally potent lines in a deadpan voice: “I can’t wait,” he says dully. “I’m terrified.” It seems more a commentary on performance — the ability to parrot emotion on command rather than seeking it someplace heartfelt and genuine — than an account of the current state of empathy in our society, but it’s an interesting execution nonetheless. As Paul speaks, the familiar double E symbol rotates in sharp, 2000s-reminiscent transparent block letters, evocative of educational grade-school math videos in imitation of Bill Nye.

It’s the challenge of an effective art exhibit to reveal the right amount of the artist’s intentions behind the work — enough to prime viewers but not so much as to rob them of their independent thought — and Distant Feel’s weakness is in its sparse and cryptic guidance through the material, leaving its viewers grasping for a frame of reference.

“Distant Feel is a rebrand of empathy,” the pamphlet — a large, folded-up, map-like document — explains. “Distant Feel is a cool, detached, focused form of empathy. It acknowledges that it’s paradoxically OK to be distant and encourages us to express our empathy in an effective way.”

Even then, however, the information we get is a sketchy and disjointed series of what have become modern platitudes about the way we live and feel today: “Empathy is fundamental to our shared human experiences; core to our biology, our evolution, our culture, our society.” Some of these cryptic, context-devoid sayings seem to contradict each other, leaving readers wondering, Is this “distant feel” idea a good thing or bad? Is it an observed phenomenon, or a concept of the artist’s own creation?

In the literature, we also learn the origin of the mysterious double E symbol: Catala contacted ad agency Droga5 to help “craft a message to change the world” — information that gives the exhibit a new, purposeful edge, energized by the quest for progress (although the object of that quest is left ambiguous).

Distant Feel, for all its political purpose, keeps viewers at an arm’s length, perhaps keeping true to its name. But as a sort of hybrid between an art exhibit and an apparent ad campaign, it seems to have the best elements of neither. While interesting and thought provoking, Distant Feel leaves little to resonate with viewers exiting the space. For all its conceptual potential, it seems an under-realized endeavor, and unfortunately will probably be a blip in most Carnegie museum goers’ visits, overshadowed by Duane Michals and dinosaurs.