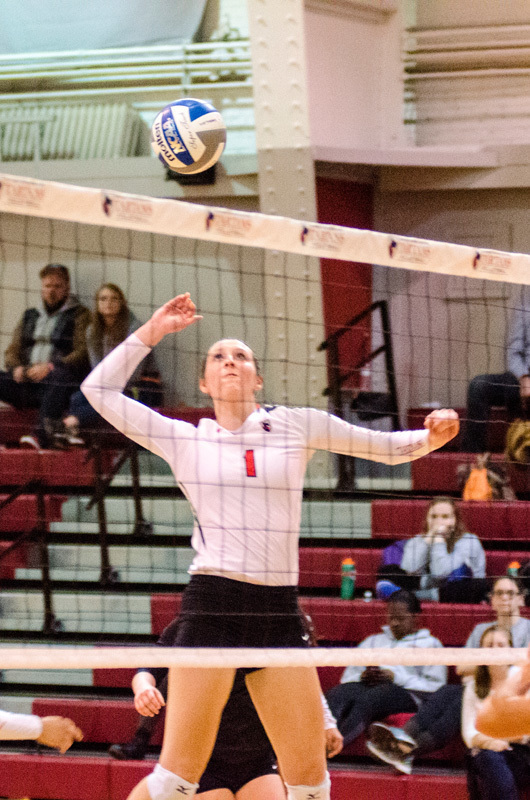 The Carnegie Mellon Women’s volleyball team faced off against the Point Park Pioneers on Friday, coming off a big couple of wins last weekend at the Juniata Wid Guisler Invitational in an attempt to improve on their impressive 24–6 record.

The Tartans refused to give up, and in the second set opened with a strong series of volleys that ended in Carnegie Mellon gaining a significant lead. This advantage was gained largely due to junior libero Molly Higgins, who set her team up with a playable ball time and time again, as she made miraculous digs consistently throughout the game to prove once again that she is the real backbone of her team’s success. But Point Park would not lay down despite Carnegie Mellon’s commanding lead. The Pioneers continued to fight valiantly in the face of impending defeat, but the resilient Tartan team did not allow the Pioneers to gain a lead at all during the set. The Tartans maintained their lead, although never running away with the game, and ended the second set victorious to tie the series 1–1.

The Tartans turned up the heat in the third set, spring boarding off of a Point Park yellow card to put the Carnegie Mellon squad up a comfortable six points early in the set. The Pioneers responded with formidable defensive resistance from their large front line, but could not manage to collapse the lead the Tartans had gained as a result of their mistakes earlier in the set. The Tartans carried their early lead smoothly through the rest of the set and took the lead in the series 2–1.

The fourth period carried on much in the same way as the third, with the Tartans gaining an early lead, though not as large as the one in the third period, and maintaining that lead until the end of the period. The Pioneers could not use their larger frontline to overtake the Tartans due to the superior teamwork shown by the Carnegie Mellon squad. Carnegie Mellon perfectly exemplified their play style in this final period as they established a very clear rhythm of set, hit, score as soon as the ball made it to their side of the court. Higgins continued to be the anchor piece for this play style, managing to turn nearly every serve into a playable ball for her teammates. Point Park had no clear response to this established rhythm and began to crumble as a result of accumulated mistakes throughout the set. Carnegie Mellon showed great defensive play at the net toward the end of the final period, and while they did give up a few scores, they did not give Point Park any source of hope of winning the game. The Pioneers must be commended for their perseverance, but ultimately the Tartans emerged victorious, closing out the final set and taking the series 3–1.

The Tartan women’s volleyball team will next look to face off against a yet undetermined opponent in the UAA championship, which will determine their place in the conference as well as place them in the NCAA national championship tournament if they emerge victorious. No matter who their opponent is, the Tartans will look to apply the same pressure as they did in this game against Point Park in order to advance their position in the national standings.