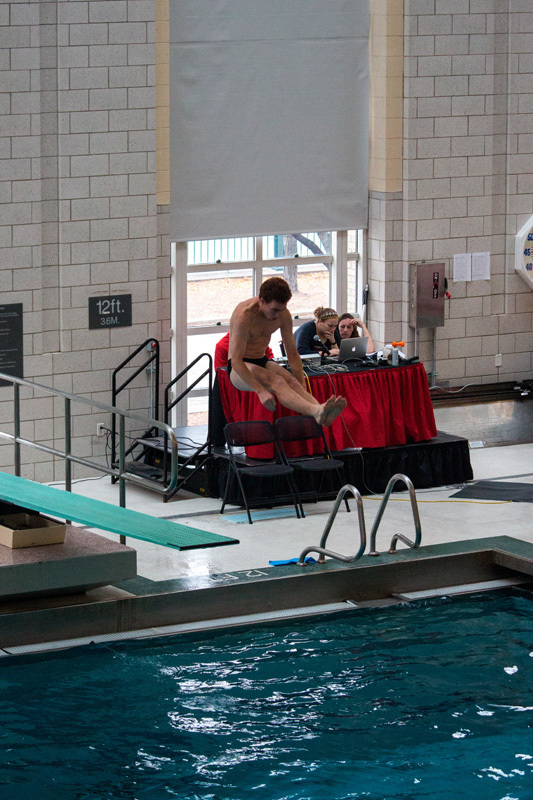 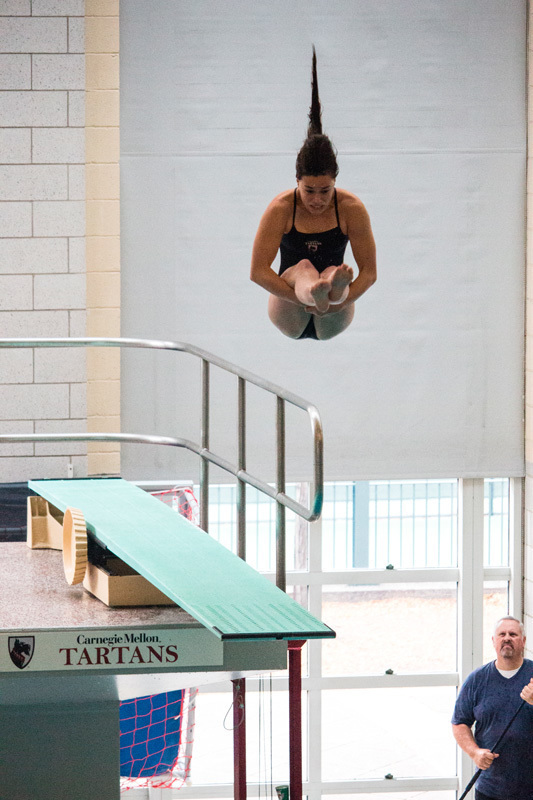 Grad student Andie Azofeifa launches herself from the diving board. (credit: Rae Lasko/) 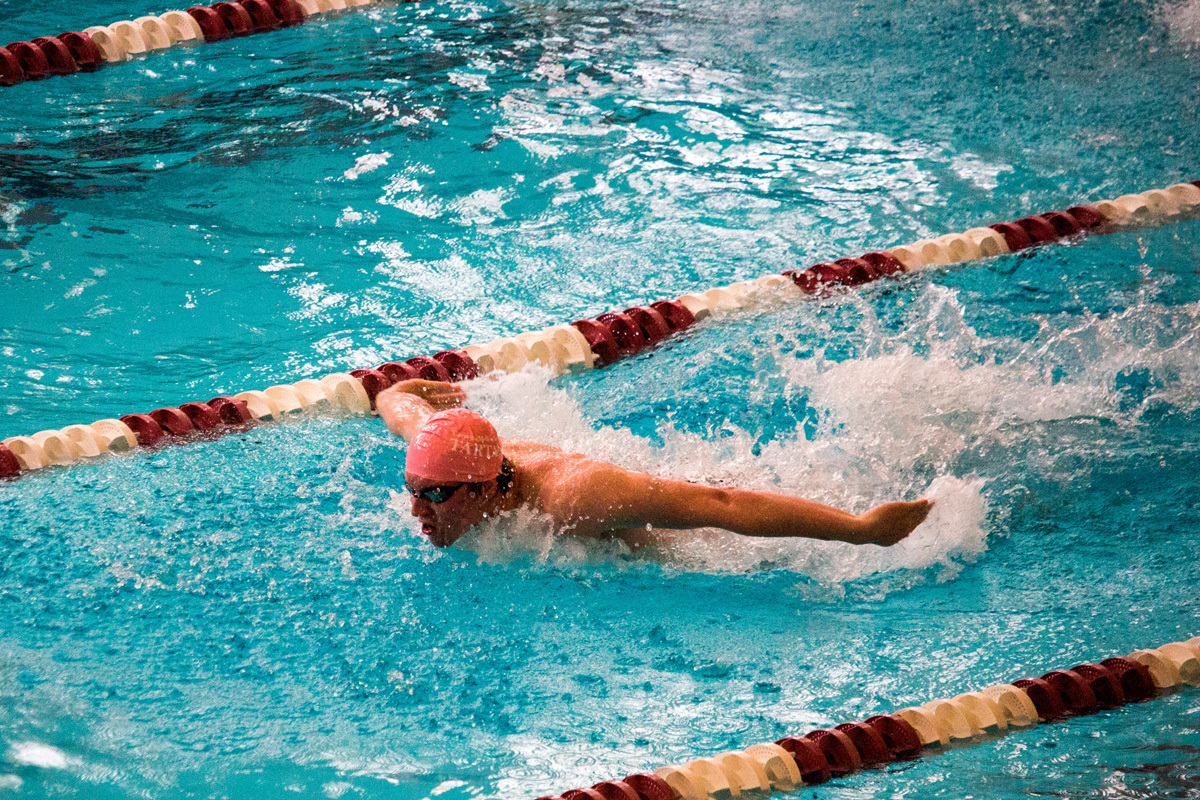 Looking to start the season off with a bang, the Carnegie Mellon men’s and women’s swimming and diving teams began competition this Saturday on campus. Both teams profited from the occasion, using the quad meet and home opener to improve their records to 3–0. The victories were lopsided in the Tartan’s favor for both genders, with the men’s team overcoming their biggest challenge from Case Western Reserve, 188–109, and the women’s team crushing their closest opposition from Clarion University, 195–103.

The women gave early indication of a dominant performance by taking first and second in the 200-yard Medley Relay to open the meet. Junior butterfly and freestyle specialist Gillian Crews helped put the women’s A team a step ahead with a great leg in the butterfly.

Both teams appeared comfortable and confident throughout, both individually and as a group. With the Tartan swimmers in lanes 2 and 6, it was a common sight to see a Carnegie swimmer in lane 6 win their race, look up, and calmly glance over to lane 2 to confirm the presence of another Carnegie swimmer up near the front.

And when one of the swimmers on the deck accidentally dropped their lap counter into the pool for a few laps during the women’s 500-yard Freestyle, it was a laughing matter, as the Tartans took the first two spots in the race regardless.

Even as the teams raced ahead on the scoreboard, the swimmers stayed involved in the meet through the end, cheering their teammates on from the sidelines up until the last lap. In a few tight contests, the swimmers on the sidelines got involved by chanting “Go, go, go” in time with breaststroke bobs, and waving their hands to urge the Carnegie swimmers in the race to some tight wins.
First-year freestyle and butterfly specialist Mitchell Riek made a big impact in his first race in college, winning all 3 of his races. Riek helped build early momentum for the men’s team with a dominant 1000-yard Freestyle. In the race, Riek started strong, and kept a hard pace to lose the rest of the field about 500 yards into the race. His time of 9:42.97 was over 13 seconds faster than the winning time for the race last year.

Riek followed up the effort with a comfortable win in 200-yard Butterfly, and a narrow, come-from-behind win in the 200-yard Individual Medley (IM). In the IM, Reik appeared to fight to stay near the leader through 150 yards before powering to the line and nabbing the win.

Reflecting on his races, Riek relished in the exciting finish of the 200 IM. “I haven’t swum the thousand before. That was my first time, so I didn’t really know what to expect from that. And two fly... I’ve done that a lot so there’s not much excitement, but I like doing the 2 IM. It’s kind of one of my off events, so it’s fun to swim.”

On the women’s side, sophomore IM and butterfly specialist Mary St. John contributed a few strong performances of her own to the Tartan onslaught, with wins in the 200-yard Butterfly and the 500-yard Freestyle races. St. John’s win in the butterfly was especially impressive given that she spent most of the race swimming in third, before taking the lead late to get the win.
In the diving portion of competition, both teams were challenged by Clarion University, who placed ahead of the Tartans in all four diving competitions. However, solid performances allowed the Carnegie men and women to earn points over the other teams, and pick up some against Clarion with the help of strong performances from divers like junior diver Machika Kaku. Kaku placed third in the 3-meter dive with a score of 206.95, only finishing behind divers from Clarion.

Both teams had a lot of success due to a combination of good competition at the front and strong depth. Riek observed that the teams “had a lot of one twos,” pointing to the number of good swimmers picking up points for the team.

A lot of the excitement and energy going into the meet helped contribute to the success. As Riek put it, “Everyone’s excited. You’re high-fiving everyone. Everyone’s in a good mood. It’s a good environment and that creates good racing.”

Going forward, both the men’s and women’s teams will look to continue their success and build on this competition leading up to the University Athletic Association (UAA) Championships in March. Next week, the teams will try to add onto their undefeated records as they go to Grove City College to take on the home team and the University of Rochester.