Bills must match scheme and players 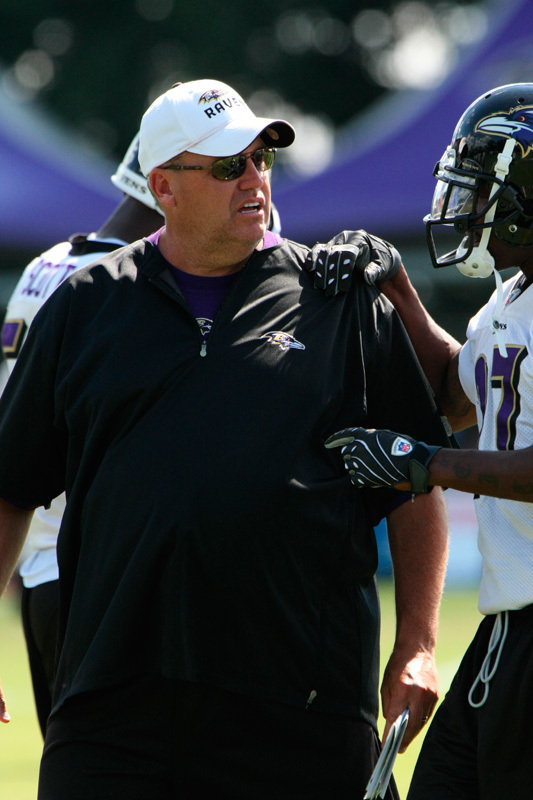 Rex Ryan talks to a player as the Ravens defensive coordinator. (credit: Courtesy of Keith Allison via Flickr Creative Commons)

The Buffalo Bills had lots of good feelings surrounding them this offseason. They had just finished one of the best defensive years by a team in recent memory, they hired Rex Ryan — considered by some the best defensive mind in football — to make that defense even better, and with wide receiver Sammy Watkins and running back LeSean McCoy, the team could be a force coming into this season.

After an opening-week win against a listless Colts team, that vision has not exactly panned out. With a horrendous loss to the Jaguars, the Bills now stand at 3–4 and don’t look anything like the team they set out to be. So what went wrong?

The easiest answer is a tough schedule. The Bills have played two undefeated opponents to this point (the Patriots and Bengals) and are 3–2 against teams comprised of mortals. They even hung with both of those undefeated teams until late. That still does not look great when the Bills eked out a win against the hapless Titans and lost to the Giants in their only other matchup against a team over .500. The Bills should be doing much better against the bad teams they have faced if they think of themselves as a playoff contender.

The second easy place to look is injuries. Watkins, McCoy, quarterback Tyrod Taylor, and others have missed significant time over the opening couple months of the season. However, this explanation also seems insufficient. With the exception of defensive tackle Kyle Williams, the injuries have largely been to the offense, which has been honestly pretty good despite the lack of experience at quarterback and the coach’s defensive bent. While backup quarterback EJ Manuel basically single-handedly lost the game to the Jaguars, it seems this team’s problems go a bit deeper than injuries.

The third obvious explanation is the Bills’ penalties. Penalties hurt, but the Patriots and Seahawks are consistently among the league’s most penalized teams, and they do plenty of winning. This, combined with the previous two, will certainly cause problems for a team, but it seems that the Bills have some more fundamental issues.

The root of this team’s problems seems to come, more than anything, from a disconnect between personnel and scheme. Rex Ryan runs a 3–4 defense, putting three lineman and four linebackers near the line of scrimmage. He then runs a two-gap system where the defensive line’s job is to contain the pocket.

There are some problems with the Bills running this defense. Defensive tackle Marcel Dareus is among the best players in football, but his arms are not quite long enough to contain both A-gaps (the spaces between the center and the guards). This allows the center or the guard to seal off one of those gaps, creating both running and throwing lanes.

Further, defensive end Mario Williams is athletic and is best at wreaking havoc in the backfield. He has faded into the background when containing his side, which is further hurting the Bills’ defensive efforts.
The Bills have tried some interesting schematic changes in order to combat this. The first change came against the Bengals. The Bills would stack the line of scrimmage, showing blitz, and then bail into coverage. This confused Bengals quarterback Andy Dalton a bit and kept the Bills in the game until the waning moments. The problem was, the gimmick wore off after a while and Dalton got better at figuring out which blitzes were real. Further, Williams and other players did not like dropping back in coverage, so the scheme was unsustainable with the players.

The second change came against the Jaguars. Ryan changed from a two-gap to a one-gap defense, empowering his defensive line to go all out after the quarterback and continuing his method of having the defense show pressure and occasionally bail. This tortured Jaguars quarterback Blake Bortles, who spent most of the game being woefully ineffective. Despite the team losing that game, the defense actually worked quite well. Of the 34 points they gave up, two came on defensive touchdowns, and one came on an absolute prayer thrown from an off balance Bortles that happened to fall into the flailing arms of Jaguars wide receiver Allen Hurns. The Bills lost multiple goal line possessions to a fumble and a (bogus) penalty, so really, they were the better football team. The problem was Manuel throwing the ball to the Jaguars when he wasn’t just dropping it on the ground for them to return.

This change to a one-gap system could, if the offense gets back on track, help right the ship for the Bills. Ryan showed in his first two years with the Jets that he could squeeze an elite defense out of solid players, he should certainly make something out of decent players.

With McCoy and Watkins getting healthier and only one game separating the Bills from the sixth seed, this team will probably make the playoffs, but if the defensive schemes keep ignoring their players, even one of the league’s best coaches with some of the league’s best players will have trouble.