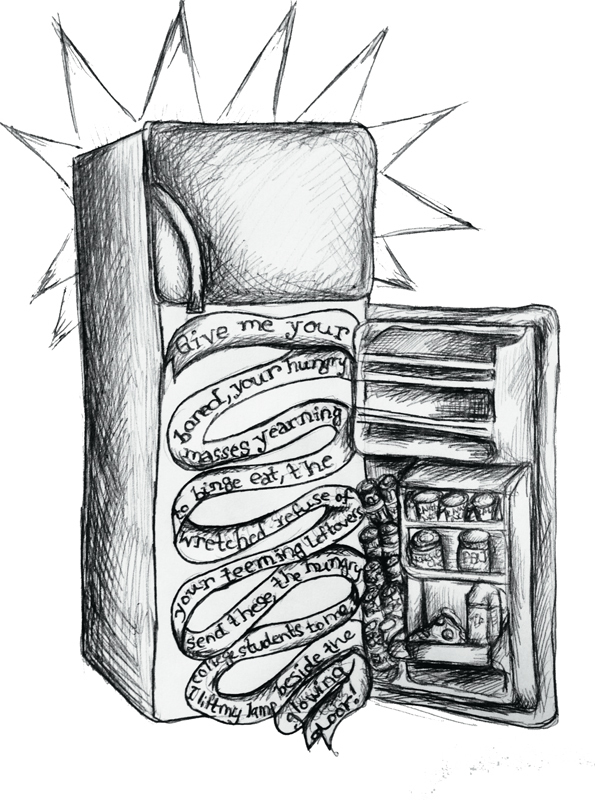 As you grab your next drink or meal from that trusty little fridge you keep in your room, you might want to know a little more about what exactly is going on in there to make sure your food stays cold and fresh.

Surprisingly, it’s a lot more complicated than you may think. For example, how do we get so much cold air to be in the fridge, without there being any in the fridge originally? How do we keep everything so compact? To understand how a fridge works, we should first look at the cooling process involved.

The cooling process necessitates combining a few components to exploit the properties of different states of matter. According to howstuffworks.com, the fridge has a compressor or a pump that condenses the refrigerant gas, known as coolant. As a result, temperature and pressure of the coolant increases. Coolant is then pushed onto coils that are located outside of the refrigerator.

Here, the heat that was just gained from the compressing process is released through cooling fins, allowing the coolant to condense back into a liquid. The liquid is then funneled into an expansion valve. Essentially, the high-pressure liquid from the coils is suddenly pushed into a low pressure area, which causes the temperature of this area to drop significantly to a lower temperature than in the fridge. Some of the refrigerant immediately evaporates while the rest expands. Consequently, the temperature of the refrigerant absorbs the heat from the fridge, cooling the fridge’s air. It also evaporates to a gas, which sucks heat and energy from the surrounding air, cooling the fridge even more. After its journey through the fridge, the coolant returns to the compressor in order to restart its cycle.

As you can tell, the coolant plays a crucial role in the cooling process. But what is the refrigerant? The coolant depends on the type of refrigerator being considered. For example, most modern refrigerators use 1,1,1,2-tetrafluoroethane (HFC-134a), which is not toxic to humans and does not deplete the ozone layer. Before this coolant was used, however, ammonia was widely used. Ammonia, though useful, is extremely toxic to people, making leaks hazardous to anyone in the vicinity. Although they have been mostly phased out, many large industrial refrigerators still use ammonia. After ammonia came chlorofluorocarbons (CFCs), which are non-toxic to humans. However, this coolant is harmful to the ozone layer.

Although most refrigerators have a common cooling process, there are a few non-standard refrigerators such as gas, propane, electric, and even solar fridges. The gas and propane fridges have a similar cooling process to that of a standard refrigerator, but are unique in their lack of both moving parts and electricity. They use ammonia and hydrogen gas in combination with the heat produced by the burning of gas or propane in order to cool the contents of the fridge.

As the water and ammonia mixture reaches the boiling point, it begins to follow the same process as the standard fridge, with the heat from the gas or propane acting as the electricity to power the compressor.

Electric and solar fridges are also very similar, using something called the Peltier effect to generate a difference in temperature. Essentially, it creates a temperature difference by applying voltage between two points. The colder side is placed in the fridge, while the hotter is placed outside.