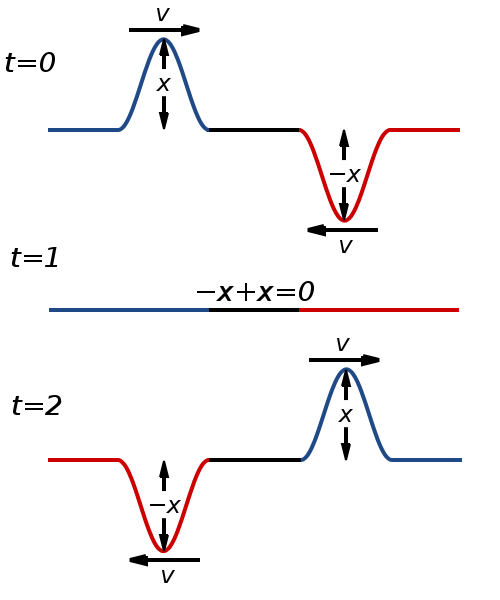 Destructive interference is the basis of noise-cancelation. The diagram shows two waves, in the top and bottom line, which can overlap and cancel as seen in the middle line. This can apply to sound waves. (credit: Courtesy of Wikimedia Commons)

The audiophile’s worst nightmare is the drone of ambient noise distracting from an otherwise clear music file. Even recreational listeners know that listening to music can be difficult when in crowded, noisy spaces. Trying to listen to music on a plane can be nearly impossible without making the volume uncomfortably loud.

Fortunately, noise-canceling technology is available for headphones, allowing listeners to hear music with reduced background noise. Noise-canceling is based on the simple property that sound is composed of longitudinal waves. Longitudinal waves are also known as compression waves because they vibrate in the same direction as they are moving. This is similar to stretching a slinky and pushing one end toward the other end, creating compressions in the slinky. The compression of the coil seems to travel lengthwise down the slinky. The sections that are not compressed but extended are called rarefactions.

In the case of sound waves, air is the medium through which waves can propagate. Energy from vibrations will create compressions and rarefactions that can travel through the air. When air changes its density by getting closer together or farther apart, our ears will detect this as noise.

When one sound wave overlaps with another sound wave, two different scenarios can occur. If the compressions occur in the same place, the overall air pressure will increase, and the sound will be perceived as being louder. If a compression in one wave occurs where a rarefaction occurs in the other wave, the overall amount the air pressure changes will decrease, so the sound will be perceived as quieter. This is known as destructive interference, and it is the basis behind noise-canceling for headphones. Perfect destructive interference occurs when waves are 180 degrees out of phase, meaning the compressions and rarefactions are perfectly aligned. Electronic sound file data encodes for electrical signals, which are sent through the headphone to produce longitudinal sound waves.

A noise-canceling headphone can be either active or passive. Passive types have sound-absorbing material fitted inside the part of the headphone that fits around the ear, which allows the headphone to absorb 20 decibels of sound. A sound-absorbing material is usually much better at canceling high-frequency sounds, but low-frequency sounds — such as the rumble of a plane engine — can still be heard. An active noise-canceling headphone has both sound-absorbing material and another barrier against unwanted noise. Generally, the headphones have a microphone that allows them to listen to external sounds that are not coming from the music being played. According to Headwize, a headphone resource website, a noise that is 180 degrees out of phase with the unwanted noise will then be created by a speaker. This should theoretically cancel out the noise perfectly.

However, noise-canceling is not perfect. It works well for constant noises but does not effectively cancel voices or sounds that change constantly and rapidly in pitch. Also, the electronics need battery power to function, which means batteries have to be recharged or replaced. The existence of a battery will add to the bulkiness of the headphones, which already are heavier because of the sound-absorbing material and extra electronics needed.

Noise-canceling is a welcomed addition to headphones, but its cost may be a deterrent to some buyers. For others, it may suffice just to turn up the volume. As headphone technology continues to improve, hearing unwanted noises will hopefully be a thing of the past.