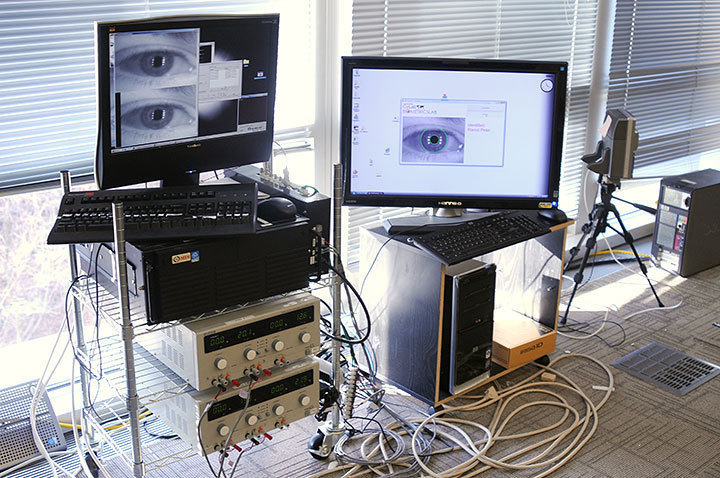 The Biometrics Lab works to create an iris fingerprint — a way to visually prove why an iris is a correct match to an image. (credit: Thomas Hofman/Photo Staff) 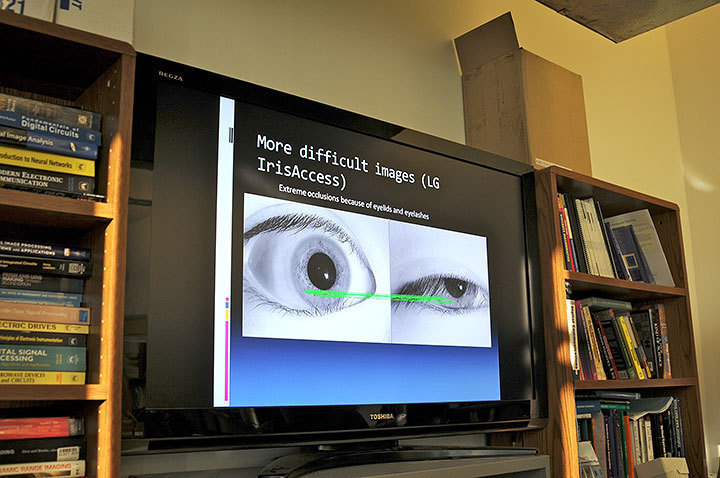 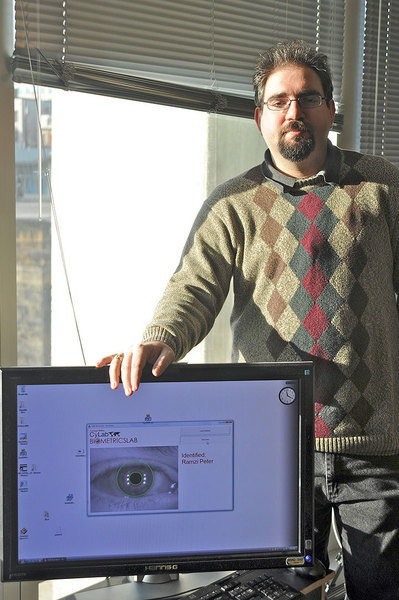 The Carnegie Mellon Biometrics Lab, led by electrical and computer engineering research scientist Marios Savvides, is exploring ways to improve facial and iris recognition technology through support from agencies such as the Department of Defense (DoD), the Federal Bureau of Investigation, Intelligence Advanced Research Projects Activity, and the Office of the Director of National Intelligence. Savvides has also been selected to be part of a Center of Academic Excellence called the Center for Academic Studies in Identity Sciences through the Office of the Director of National Intelligence. Face recognition requires several steps, all of which students at Savvides’ lab are developing for applications in the real world. Once completed, these separate components will be combined.

In the laboratory, students work at a multi-step process so that one day cameras will easily identify a face from any angle. The first step is getting the camera to track the face’s movements. A camera follows a student walking backward the entire distance of the lab, and the green circle that predicts the head’s movement provides successful results.

Next, the camera needs to identify the person. Yet, what if the person now wears glasses or has cut his or her hair? Especially in a security situation, a suspect will often try to disguise his or her features. “We are trying to add human intelligence to face matchers,” Savvides said. Once a picture is taken, the computer can quickly relay the face’s gender, any facial hair, and if the subject is wearing glasses, all within a certain degree of accuracy. The program will select 20 faces that best match the picture taken. These pictures have a high enough “bare score” to qualify them as a match to the original picture. Hopefully, adding the human intelligence component will reduce the risk of a computer identifying the wrong people. “The worst thing that could happen is that you do the top 20 [matches] and the bare score that would have matched is not even in the top-20 list,” said Savvides.

Next, the laboratory explores how to identity a person if their face is at a different angle. Current cameras are only able to capture a face from ± 15 degrees. With the lab’s work, this technology could soon match any angle. From only a 2-D photo, Jingu Heo, an electrical and computer engineering graduate student, can create a 3-D model of the face with stunning detail, as demonstrated with 3-D models of Jay Leno’s faces formed from 2-D pictures located online.

In a separate room is a full-length scanner, similar to those in airports. The catch is that this one can identify your iris from up to 13 meters. The lab is working to make the images clearer by aligning several images of the iris into one higher-resolution image. A real-world application of this, explained Vijayakumar Bhagavatula, a professor in the department of electrical and computer engineering, is already in use in Canadian airports. “They use it for crew and people that use the airport very regularly. Instead of having them go through the standard check lines, they enroll the iris images of these people beforehand with background screening.” Additionally, Savvides and his team are working to create an iris fingerprint, a way to visually prove that an iris is a correct match.

In the U.S. National Institute of Standards and Technology’s Face Recognition Grand Challenge (FRGC) and Iris Challenge Evaluation, the projects met with success in 2005, when Savvides and Bhagavatula’s team won first place at FRGC. They developed “an algorithm [that] went from a 12 percent verification rate to 82.4 percent verification. Most companies were between 35 and 50 percent,” said Savvides.

With this technology, instead of a soldier measuring a villager’s iris by hand, a system could scan villagers’ irises from a distance, thanks to a $3–4 million project Savvides has with the DoD. Cameras could identify suspects before they reached human guards. A personal computer could turn off if its user left. Yet, with the advent of new technology also come privacy concerns for the subjects.

“My current research focuses on how to consider security, privacy, usability, and costs at the design stage, even before a system is built,” said Cai.

It will be rewarding to continue to monitor the Carnegie Mellon Biometrics Lab in the future, as much of their work may integrate into our daily lives. “If anything we do in this lab can save one life or make a difference, then we have done our jobs,” Savvides said.